Home Entertainment The Blue Exorcist: The Truth about Rin and Yukio’s Parents 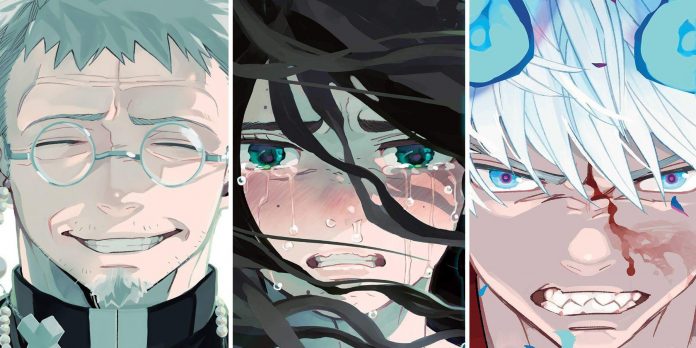 When it comes to origin, there are a lot of characters in The Blue Exorcist who have wonderful and amazing parents. However, none of them is as ridiculous and tragic as the pedigree of the main characters themselves, Rin and Yukio Okumura. At the beginning of the series, we already know that the Okumura brothers are the sons of an ordinary human mother. However, it is surprising that their father. Because their father is none other than Satan himself.

This alone is shocking. However, most people may not realize how devastating the real story about their parents really is. This article will reveal the true story of Rin and Yukio’s parents. Anime and manga use different approaches to the story of their origin, but this article will be devoted to manga.

Who are the Okumura Brothers

Rin and Yukio Okumura are twin brothers who decided to follow in the footsteps of their adoptive father Shiro Fujimoto. Therefore, they become exorcists and devote themselves to saving people from the danger of demons.

However, Rin didn’t know that Yukio had already become an exorcist many years before Rin even thought about such a decision. As a result, although technically Rin is the older brother between the two of them, Yukio is superior to him when it comes to the exorcist. After all, when this article was written, Yukio had already become a paladin, the highest rank an exorcist can reach, and Rin was still an exwire, essentially just an exorcist student.

Although the brothers hate their biological father with the blazing fury of a thousand suns, they can both still use the power of Satan to some extent. Of the two of them, Rin inherited the power of blue fire from his father. That’s why whenever he releases this power, a pair of horns and a tail of blue flames appear on his body. As for Yukio, he is more or less a normal person. However, his left eye is connected to Satan, and when activated, whether he wants to or not, Satan will be able to see through Yukio’s body and impose his will on him.

How do their parents meet

As mentioned earlier, the boys’ father is the king of the underworld, Satan. And their mother is an ordinary person named Yuri Egin. Yuri was an orphan raised by a homeless couple when she met a young Shiro Fujimoto. Yuri quickly becomes attached to Shiro and even joins the True Cross Academy and becomes an exorcist like him. However, unlike Shiro, she believes that demons and humans can understand and live together in harmony. This belief also brings her closer to Satan. Honestly, when Yuri first met Satan, he was just a little blue fire. She considers him her little demon friend and even calls him Rinka.

After a couple of years at the True Cross Academy and working together as an exorcist, Yuri finally realizes that she loves the man who saved her and has been with her all these years, Shiro Fujimoto. However, Yuri doesn’t realize that Shiro is actually an experimental subject of the True Cross Academy in their attempts to create the perfect body for the Demon Kings. After all, demons need to have a living human body if they want to materialize in the human world.

Nobody knows that Satan manages to get hold of one of the failed clones of the Order, which is largely identical to Shiro. Since Yuri is the only person who has been with Satan for many years, he demands to be with her all the time, otherwise he threatens to kill every person he sees. That’s how Yuri and Satan began to spend time together. Thanks to their interaction, Yuri begins to think that Satan is really capable of compassion and can be taught to be kind to people. And when she opens her heart to him, and the fact that he looks identical to the man she loves, the inevitable happens, and eventually she becomes pregnant with Satan’s child.

What happened to their parents

When the Order of the True Cross realizes that Yuri is pregnant, they immediately separate Yuri from Satan. At that time, the clone’s body that Satan possessed began to collapse because it could not contain his enormous power. As if that’s not enough, the separation from Yuri also makes him emotionally unstable.

Things get extremely chaotic when Yuri gives birth to twins. In particular, Rin is an uncontrollable little demon who manages to harm numerous high-ranking members of the Order. At the same time, Satan is rampaging, inhabiting different people in an attempt to find the right body, killing hundreds of innocent people and at the same time wreaking havoc in the city. This terrible night will be remembered as a Blue Night.

When Shiro Fujimoto, who has become an incredibly powerful exorcist, sealed Rin’s powers in the Kurikara sword while other high-ranking exorcists work together to exorcise Satan, things finally began to calm down.