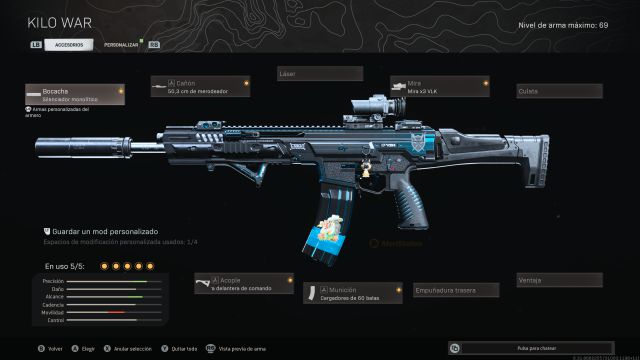 We must remind you that from Season 3 you will only see Black Ops Cold War weapons when opening chests on the stage. With the arrival of Verdansk 1984, the Modern Warfare arsenal will only remain available as part of the Gunsmith. That won’t hold you back when it comes to progressing or using them: just the resources prior to a supply drawer only point to the Treyarch game.

Then we leave you with the list of the best weapons.

The old rockers never die. The Kilo 141 remains one of the best weapons available in Call of Duty: Warzone. With this modification we seek to be aggressive in practically all distances, except in a direct confrontation against submachine guns. The monolithic silencer and its 60 rounds per magazine allow it to be a superclass even today. Of course, for close encounters it loses compared to others. We recommend it for those new to battle royale.

Since its arrival in Season 1 that it shares with Black Ops Cold War, the MAC-10 has ousted submachine guns such as the MP5 and MP7, as well as the Bizon and derivatives. You should know that you can only use it in direct encounters, nothing medium or long. Its high recoil makes up for it with unmatched damage and cadence. This version of the submachine gun has exactly what we look for in a handgun: quiet, high-capacity and deadly. press the trigger and you will see all enemies die at close range.

Arcane On Netflix: When And At What Time Does The League...