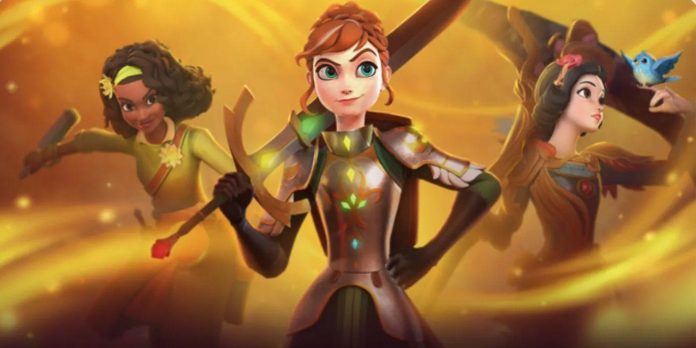 Even though there are microtransactions in Disney Mirrorverse, it’s easy to play for free and advance without spending money on new Guardians or resources. There are a few different types of missions and milestones that players can work on to quickly build up their currencies, upgrade materials, and other resources. Additionally, the game awards a lot of crystals early on that can unlock one, two, or three-star Guardians.

When first starting out, players will need to complete the tutorial and play through the story at least until the ability to fight with three Guardians is unlocked. Completing the story up to this point will introduce players to the different game mechanics and how to fight with multiple characters in Disney Mirrorverse while only controlling one of them. Most game modes use three Guardians, except for the 1v1 Showdown event. Once players unlock the third Guardian slot in story mode, they can focus on free activities that will help them progress quicker.

While completing any activity will eventually lead to valuable rewards, there are a few things that players can do to speed up the process of leveling their Guardians and increasing their team’s power level for free in Disney Mirrorverse. Every challenge has a recommended power level based on the opposing team’s strength, and players will need to continuously upgrade their Guardians in order to win matches and earn a three-star rating. Completing missions, joining an Alliance, and taking advantage of free rewards will make it easier to succeed on Hard or Expert difficulty without spending any money.

The easiest way to quickly earn rewards is to complete the game’s daily missions. Eight missions can be completed every day, and there’s a bonus reward for finishing at least six of them. Daily missions are extremely easy in Disney Mirrorverse. For example, some of the daily missions include leveling up a Guardian once, completing five encounters, and using 25 specials. Completing all of the daily missions will earn players one Glowing Crystal, 500 Gold, 15 Orbs, and one Dungeon T1 Potion.

The biggest draw for clearing the daily missions in Disney Mirrorverse is the Glowing Crystal, which guarantees players will get at least one Guardian pull every day. Although a three-star Guardian is the highest available rating when using a Glowing Crystal, earning duplicate Guardians can eventually lead to four or five star characters when enough Shards are collected. Along with completing daily missions, there are a few others ways crystals, Guardians, or resources can be earned without spending real money.

Join An Alliance In Disney Mirrorverse

Disney Mirrorverse’s Alliances are one of the best ways to passively earn points so more rewards can be unlocked. Laurels are awarded for reaching new milestones in an Alliance mission, and they can be used to get Donald, Goofy, and other prizes. There are always four active Alliance missions where players can earn Laurels for using crystals, completing Dungeon floors, and finishing non-Dunegon encounters with a specific type of character, such as ranged or melee. Laurels can be used to unlock a one-star Donald and Goofy for 2,000 each, then Alliance Shards can be purchased for the chance to get the same Guardians with a higher star rating. Players can also use Laurels to get more leveling materials, Orbs, and Gold.

Related: Marvel Snap: How To Get More Credits (For Free)

Joining an Alliance or creating one is very simple and should be done as early as possible in Disney Mirrorverse. If players are unsure which Alliance to join, they can use the in-game chat to see who is recruiting and which groups are more active. Alliances can have up to 20 players, and searching for a group will indicate how many members it has already. After joining an Alliance, players can leave at any time by going into the Alliance section and selecting settings. From the Alliance page, players can also see other members, check recent activity, and view current, upcoming, and completed missions. Joining an Alliance will get players a decent amount of rewards each week for completing pretty much any activity in the game.

Along with daily missions, there are journey missions and achievements to complete in Disney Mirrorverse. These are more long-term endeavors, but players should be aware of what missions are available and work on completing them as quickly as possible without spending money on the game. Since the achievements and missions take longer to complete the rewards are more substantial. Reaching new player levels, opening crystals, completing story mode levels, and other activities can reward players with Orbs, Gold, and crystals that guarantee a four-star Guardian, among other items. Being aware of what missions or achievements are nearing completion and actively working to finish them is a great way to gather a lot of resources without spending money.

The Bazaar refreshes every two hours and gives players a free item, and a free page refresh with a second item to claim. Going to the Bazaar frequently will help players earn a lot of resources for free, including Motes for leveling Guardians, different tier Gems, Gold, and Orbs. Additionally, the Bazaar usually has at least one cosmetic items, such as a Profile Frame or Decorator. Aside from the two free items every couple of hours, everything in the Bazaar costs either Gold or Orbs, and most items are available for a relatively low price. Completing the other activities will earn players enough Gold and Orbs fast so they can buy resources without spending real money. This will help with upgrading Guardians and building a powerful team in Disney Mirrorverse.

If players are having trouble increasing their team’s collective power level high enough to continue story mode or complete harder combat encounters in Disney Mirrorverse, then they can auto-complete previously won battles to quickly earn more supplies for free. Supply Runs, Towers, and Events usually reward a decent amount of Motes and other leveling materials. A lot of encounters have at least 20 victories available per day, and the energy cost is typically between three and five depending on what level the encounter is.

There are a lot of free methods for leveling up and strengthening Guardians, as well as unlocking characters, such as Aladdin in Disney Mirrorverse. Missions, Alliance milestones, and the Bazaar have rewards available daily, and there are various game modes with combat encounters and different difficulty settings. Additionally, players can complete the 1v1 Showdown encounters at no energy cost to receive one-time rewards for each match. Different activities can be completed every few hours to quickly get ahead and unlock every available Guardian, such as Sully, Merida, or Jack Sparrow, in Disney Mirrorverse.