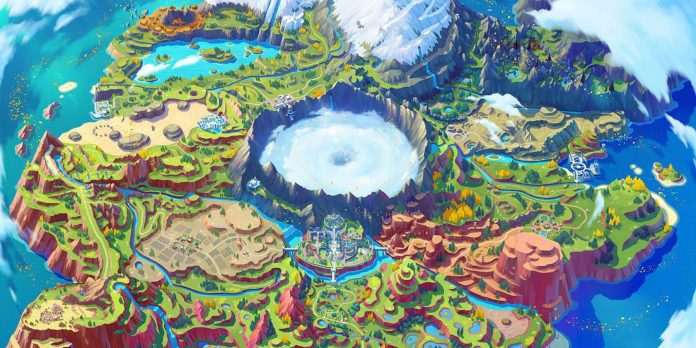 There have been a lot of rumors about Pokemon Scarlet and Violet in recent weeks in light of the scant information disclosed by Game Freak and The Pokemon Company. It is noteworthy, however, that one of the most obvious rumors is that Pokemon Scarlet and Violet will have DLC. This expansion model worked for Sword and Shield, and fans can probably expect the same from these new games.

Of course, Pokemon Scarlet and Violet are likely to be repeated in the Isle of Armor and Crown Tundra DLC. However, after the Paldea region is finally named and its map is shown, it seems that there is an obvious setting that should explore its DLC: Kalos, if not completely.

Pokemon S/V: The anniversary of Pokemon X and Y should show the connection between Kalos and Paldea

It’s unlikely that the Pokemon S/V DLC will open up the opportunity for players to explore the whole of Kalos, but it makes sense if players go to a small region of Kalos. Firstly, Pokemon X and Y will celebrate their 10th anniversary in 2023. Pokemon Scarlet and Violet’s release date is October, which means their first DLC won’t be released until 2023 anyway. This time cannot be ignored, given the connections between Kalos and Paldea.

Kalos Pokemon X and Y are based on France, and Paldea Pokemon Scarlet and Violet are based on Spain. France and Spain share borders, making Kalos and Paldea the first two regions that have been linked since the first few generations of Pokemon. To ignore this would be a travesty, and it seems that the companies involved are potentially already acknowledging this. As can be seen on the map of Kalos above, the southern border is covered with mountains and clouds to hide the potential of everything beyond it. The upper right corner of Paldea, where it logically connects to Kalos, is also hidden behind clouds and mountains.

This may not be a region that fans are familiar with, but these mountains would be a great place to expand and get an official name. All Pokemon S/V needs to do is confirm that this region is part of Kalos, show a bunch of Kalos Pokemon here, and possibly explore storylines that may overlap with Scarlet and Violet Pokemon, as well as Pokemon X and Y. Perhaps because Pokemon S Trainers/V are students, they are sent to this region to conduct some Zygarde research that could bring to life the long-lost ideas of fans about Pokemon Z. If so, it will probably be popular with many fans who wanted more regional representation in the main games. .