Home Entertainment The best Minions 2 character creates a dark hole in the plot... 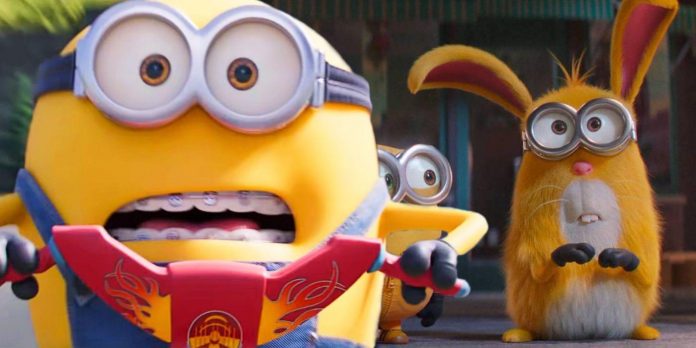 A minor character introduced in Minions: The Rise of Gru, in fact, creates a dark hole in the plot of “Despicable Me” due to its absence. Minions: The Rise of Gru is the second prequel to the Despicable Me franchise, which tells about the early days of Gru’s villainy, when he teams up with his accomplices in yellow jeans. “The Rise of Gru” tells the story of a young Gru who tries to join his favorite group of villains, the “Vicious Six”, but instead learns an important and valuable lesson about the importance of teamwork and loyalty.
The sequel “Minions” tells a lot about the minions and how their relationship with Gru developed, which led to “Despicable Me”. Their loyalty to their “mini-boss” is unshakable, and when he is kidnapped by the villain Wilde Knuckles, they begin to act, stopping at nothing until he is safe. They meet acupuncture master Chow, who trains Kevin, Stuart and Bob in kung fu to save Gru. This leads them to the decisive battle of Minions: The Rise of Gru, in which they find their inner beasts and, transformed by the power of the Chinese zodiac into a rabbit, a rooster and a goat, fight with Vicious 6.
Link: Minions: The Rise Of Gru Voice Cast Guide: What actors look like in real life
One little joke during the minion transformation is that one of the eggs laid by Stuart hatches a minion chick. When the Zodiac forces change places, the minions return to their normal form, but the chicken remains unchanged. He can be seen again in the scene after the credits of “Minions: The Rise of Gru”, which confirms that he still exists even after the magic of the Zodiac has dissipated. However, this creates a subtle but dark hole in the plot regarding the location of the chicken minion in the Despicable Me movies.
Where is the Chicken Minion from Despicable Me?!
Since the minions are supposedly invincible— several scenes in “Minions: The Rise of Gru” confirm this — it follows that the chicken minion shares their remarkable resilience. After all, he has many other minion characteristics, including the ability to make sad eyes as a means of emotionally manipulating people, and the film gives no indication that this is not the case. Since Stewart then appears to take Chikinion, it may seem that he becomes part of the Gru operation.
Since the chicken Minion is missing from the Despicable Me movies, the most likely explanation is that it was lost or abandoned. However, since he is probably immortal, this would mean that the little chicken/minion hybrid is just wandering the Earth alone, confused and alone. His status as a magical fusion of Minion and bird will most likely doom Chikinion to an eternity when he never truly belongs to anyone, although his absence in Despicable Me indicates that this could have happened to the creature after Minions: The Gru Rebellion.
This plot hole, although insignificant, is an urgent problem that, hopefully, will be solved in the future. It’s likely that another Minion movie will be made, especially after the box office success of “Minions: The Rise of Gru,” and this hypothetical story could bridge the gap between the two franchises and simultaneously reveal the fate of the Chicken. Although there doesn’t seem to be a happy ending for this creature, the sequel “Minions: The Rise of Gru” should solve the problem of the absence of a chicken Minion in “Despicable Me”.

Luanne de Lesseps reveals who she needs in the series “Legacy...