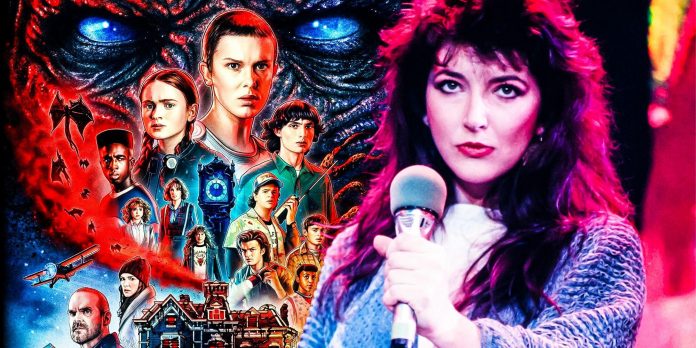 The artist’s popularity reached new heights after the first volume of the fourth season of “Very Strange Cases”. Here are a few tracks for those interested in music from “Running Up That Hill” singer Kate Bush. After noticeably using her song “Running Up That Hill” in the season 4 episode of “Very Strange Things” “Dear Billy”, the artist Kate Bush was introduced to a wider and modern audience. While the song itself has experienced a surge in popularity, there is an extensive catalog of Bush’s music for anyone who wants to learn more from the English singer.

Kate Bush’s music becomes an integral part of the first volume of the fourth season of the TV series “Very Strange Things”. The 1985 New Wave track is Max’s (Sadie Sink) favorite song, which helps her escape during an incredibly difficult time. “Running Up That Hill” also saves Max’s life in “Dear Billy” as her friends can use music to help Max escape from Vecna. After the premiere of the 4th season of the TV series “Very Strange Things”, the number of listenings of “Running Up That Hill” increased by 8,700% worldwide (according to Billboard), and the song currently ranks first in the US Spotify charts with 2,023 million listenings (according to the chart). .

Kate Bush’s beautiful vocals and masterful songwriting clearly resonated with fans Very strange things, especially for those who are not familiar with her music before. Kate Bush’s discography of ten studio albums may seem a little intimidating at first. Here’s a selection of some of Kate Bush’s best songs worth listening to next.

“Wuthering Heights” is the debut single by Kate Bush from her 1978 first album The Kick Inside. Bush’s songwriting was inspired by the BBC’s 1967 adaptation of Emily Bronte’s tragic Gothic novel. The lyrics make references to the tragic Wuthering Heights relationship between Katie Earnshaw and Heathcliff, and the song is sung from Katie’s point of view as she pleads through Heathcliff’s window to let her in. For those who liked Kate Bush’s angelic vocals in “Running Up That”. Hill”, “Wuthering Heights” — a real pleasure. Bush was only 18 years old when she recorded this song, and this single is an early example of how beautiful her voice can be. There is also a beautiful cover of “Wuthering Heights” recorded by Pat Benatar for her 1980 album Crimes of Passion.

Like “Running Up That Hill”, “Cloudbusting” is a single from Bush’s 1985 album Hounds of Love. Cloudbusting was inspired by Peter Reich’s memoirs and memories of the relationship between a young Peter and his father, psychologist Wilhelm Reich. “Cloudbusting” is a great song that embodies hope in times of emotional despair. The key moment of the Hulu movie “Palm Springs” uses “Cloudbusting”, which is another proof that Kate Bush’s music is perfect for voicing emotional scenes. “Cloudbusting” is used in “Something Good”, a 1992 song by the electronic band Utah Saints. Bush even sold the Utah Saints footage from the “Cloudbusting” music video for use in their music video, which was nice.

“This Woman’s Work” is the second single by Kate Bush from the 1989 album The Sensual World. The lyrics focus on a father who must face an unexpected and frightening crisis during the delivery of his wife. It’s a beautiful and very touching song, written from a very vulnerable point of view. Bush originally wrote “This Woman’s Job” for the 1988 John Hughes film She’s Going to Have a Baby; the song is used in the climax of the film, where Jake (Kevin Bacon) learns that the lives of his wife Christie (Elizabeth McGovern) and his unborn child are in danger. “This Woman’s Work” makes a strong impression as the scene alternates from Jake waiting for news about his wife’s condition to reminiscing about happier times with the couple. Even outside of the film, “This Woman’s Work” is still emotionally effective and is another absolutely brilliant Kate Bush song. The cover version of R&B singer Maxwell’s “This Woman’s Work” for the 1997 episode of MTV Unplugged is also very beautiful and worthy of attention.

Following Beavis and Butthead, Chris Rock’s “Everybody Hates Chris” is the...