Home Entertainment The author of “Game of Thrones” about the Targaryen Civil War, inspired... 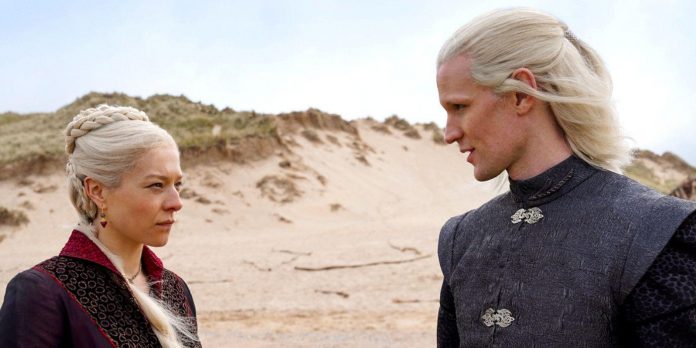 Game of Thrones author George R. R. Martin reveals the historical inspiration behind the Targaryen Civil War presented in House of the Dragon. The upcoming HBO series is a prequel to the famous fantasy series, which aired for eight seasons between 2011 and 2019. The show instead tells the story of “Fire and Blood,” a Martin prequel story set centuries before the events of “Game of Thrones.”

Created by Martin and Ryan J. By the way, the House of the Dragon will introduce a number of new characters in another epic struggle for the Iron Throne. While Game of Thrones focuses on several of the most powerful families in Westeros (namely, the Starks, Lannisters, Baratheons, Targaryens, Tyrells and Martells), the prequel series depicts a more internal feud, where the first splits in the Targaryen dynasty begin to manifest. a show in a fantastic civil war known as the Dance of Dragons. Production began in the UK last year, and the first season will begin during the reign of King Viserys I Targaryen, played by Paddy Considine.

By topic: The House of the Dragon is a book? A prequel? How does this relate to GOT

Now, during the “House of the Dragon” panel at Comic-Con in San Diego, Martin talked about some real-life historical events that inspired this story. Expressing the importance of finding real historical influences on his fantasy works, Martin said that the main source of references to the prequels was “Anarchy”. The English Civil War, which took place in the XII century, the author drew a comparison with the decision of King Henry I to name his daughter Matilda the heir to the throne and the ignoring of this by the nobility in favor of her cousin Stephen.

Being 200 years before the events of “Game of Thrones”, Martin’s historical sources of inspiration seem to correspond to a similar time frame, since he previously stated that the “Wars of the Roses” (which took place in the 15th century) greatly influenced the “Song of Ice and Fire”. Already featured in trailers, “House of the Dragon” seems set to return to the theme of misogyny that became such a focus in the original HBO series, as strong female characters such as Cersei, Arya, Sansa and Daenerys were repeatedly ignored by male relatives and the patriarchal system of Westeros. Focusing instead on the plight of Princess Rhaenyra Targaryen and attempts to usurp her birthright, the prequel may draw some interesting parallels with her future descendant and self-proclaimed Mother of dragons, Daenerys.

While Rainira’s struggle may seem sympathetic at first glance, Game of Thrones fans may want to exercise great caution before supporting any Targaryen pretender to the Iron Throne. The fate of Daenerys, who became a fan favorite at the beginning of the original show for her strength and self-proclaimed desire to “break the wheel”, left many viewers with a sour taste in their mouths, as she seemingly lost to the legendary Targaryen. madness, burning King’s Landing to the ground before she is killed by her lover and nephew Jon Snow. Nevertheless, regardless of whether fans are willing to support the new Targaryen heir, “House of the Dragon” certainly promises to provide viewers with a promising line of complex, morally ambiguous characters.

The Iron Man team from the “Civil War” secretly foreshadowed the...