Home Entertainment The age of the characters of the show of the 90s shows... 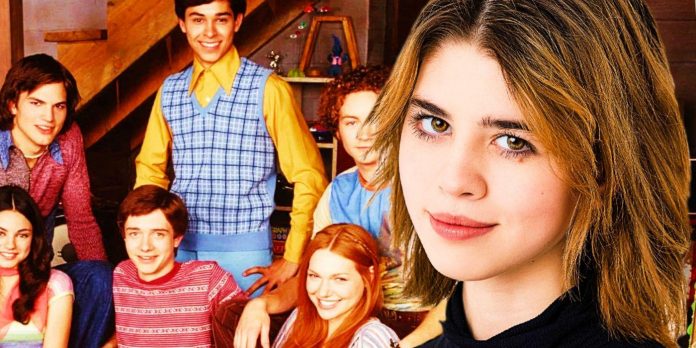 That ‘90s Show’s characters are hinted to be quite a bit younger than That ‘70s Show’s characters were when the original series began, which reveals big changes to the key elements of the sitcom. Set 15 and a half years after That ‘70s Show’s ending, Netflix’s That ‘90s Show picks up in 1995 in Point Place, Wisconsin, with many of the original characters returning. However, the sitcom sequel will primarily focus on a new generation of alternative Point Place teens through Eric and Donna’s teenage daughter Leia Forman, who will be staying with Red and Kitty for the summer.

That ‘90s Show’s main cast will include Kurtwood Smith and Debra Jo Rupp returning as Red and Kitty Forman, Callie Haverda as Leia Forman, Mace Coronel as Jay, Ashley Aufderheide as Gwen, Reyn Doi as Ozzie, Maxwell Acee Donovan as Nate, and Samantha Morelos as Nikki. Returning in guest roles are That ‘70s Show’s original actors Topher Grace as Eric, Laura Prepon as Donna, Ashton Kutcher as Kelso, Mila Kunis as Jackie, Wilmer Valderrama as Fez, and Tommy Chong as Leo. It’s unclear how much time will be covered during season 1, but That ‘90s Show’s image suggests a character reunion could take place at a 4th of July celebration.

How Old Is Leia Forman In That ‘90s Show?

That ‘90s Show hasn’t confirmed Leia Forman’s exact age, but the synopsis of the character confirms that she’s around high school age. Since That ‘90s Show’s timeline takes place almost exactly 15 and a half years after That ‘70s Show, the oldest that Leia can be is 14 years and 9 months old. Eric was gone in Africa throughout all of That ‘70s Show season 8, but he and Donna reunited in the series finale. As such, to have a teenager who can already be getting into drugs, alcohol, and sex at this time, Donna would have gotten pregnant almost immediately after That ‘70s Show’s finale. Since Leia’s birthday would have to be in August or September 1980 at the earliest (depending on whether she was born premature), her birthday suggests that she only just graduated from middle school when That ‘90s Show begins. Eric and Donna’s daughter could have begun her freshman year of high school really young, but the math indicates that she won’t be starting high school until after That ‘90s Show season 1, which is set in the summer of 1995.

How Old That ‘70s Show’s Characters Were In Season 1

That ‘70s Show’s second episode of season 1 takes place on Eric’s 17th birthday, but the timeline is pretty fuzzy thereafter – seemingly somewhat intentionally, in order to avoid any future plot holes being crafted by establishing too solidly when certain events happened. However, it’s suggested that Eric, Hyde, Donna, and Fez are all 17 years old during That ‘70s Show seasons 1 and 2. The sitcom established early on that Jackie is one year younger than the rest of the group, which means she’s only 16 years old at the start of That ‘70s Show. Kelso’s age in That ‘70s Show is also later revealed to be one year older than most of the gang, with Ashton Kutcher’s character really 18 years old during the first few seasons of the sitcom. Since only about 3 years go by throughout That ‘70s Show, the characters are all around 19-20 years old at the end of the original series. That ‘70s Show’s characters’ ages in That ‘90s Show will be about 35 years old.

Considering Leia and presumably her close friends will only be 14-15 years old and not even in high school yet, That ‘90s Show season 1 likely won’t feature the teens drinking, smoking, and having sex in the way that That ‘70s Show’s returning characters did at the start of the original show. This isn’t to say that 15-year-olds weren’t drinking and smoking marijuana in the mid-1990s, but that Netflix may be more hesitant to depict teens that aren’t even in high school yet as habitual users. Rather, That ‘90s Show season 1 is more likely to show the main cast learning fully about things like drugs, and basing the jokes off this for the time being instead.

Related: How Old ‘70s Show Characters Would Be in That ‘90s Show

That ‘70s Show featured a few flashbacks to when Hyde, Eric, and Kelso first smoked weed together in The Circle, which took place when they were 13-14 years old in 1974. With Mila Kunis being much younger than the other actors, 16-year-old Jackie didn’t join The Circle until season 2. Since Leia will have to be 14 years old when That ‘90s Show begins, she could still be following the same timeline of engaging in illicit activities as her parents, but it isn’t likely to be anywhere close to the same level of smoking and drinking that Eric and his friends exhibited during That ‘70s Show season 1. That ‘90s Show’s character descriptions reveal that some of the characters will be a bit older than Leia, which may be how she’s introduced to the activities that her parents were doing around the same age in the Forman basement.

Even though the iconic elements of That ‘70s Show and its depiction of teenage lifestyles that defined the sitcom aren’t likely to be as prevalent in That ‘90s Show season 1, introducing the teens at a younger age in the sequel series avoids a key problem of the original. That ‘70s Show began in 1976 when the characters were 17 years old, which ended up keeping them in high school for five seasons rather than two. Trying to keep the teens as young as possible, their birthdays became confusing throughout That ‘70s Show’s timeline, with there being an extremely muddled passage of time. The show would obviously have to end in 1979 (midnight on January 1, 1980 to be exact), so That ’70s Show stretched out three years and a half years’ worth of time across eight seasons.

That ‘90s Show may have the teens at only about 15 years old, but this reasonably keeps them living in Point Place for far longer without having to stretch the timeline in the same manner as That ’70s Show. Beginning in 1995 means that if That ‘90s Show enjoys five seasons, there can be a much more natural progression of time. If Leia Forman still only comes around to Point Places for her summer vacations, having the character be younger than her show predecessors – but still at the high school age – is the best choice for That ‘90s Show’s early plans.

Roman Raines may also not participate in WWE Extreme Rules