Home Entertainment The actors of the film “The Lord of the Rings” joined the... 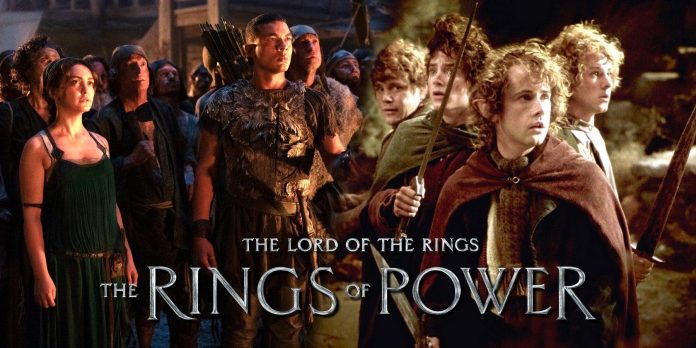 Three actors from Peter Jackson’s original “Lord of the Rings” trilogy offered to show support to the colored actors participating in the Amazon Prime series “Rings of Power”, while the cast of the newest show also united in solidarity. Given the number of racist attacks that non-white actors in the series have recently been subjected to, it seems that the official statement was only a matter of time, and not too soon.

Elijah Wood, who played Frodo in the original Lord of the Rings trilogy, shared a Twitter post showing him with Dominic Monaghan (Merry) and Billy Boyd (Pippin) with the caption “Welcome here.” In the picture, he and his fellow Hobbits were dressed in shirts with an Elvish translation of the inscription, as well as ears of various races of Middle-earth with different skin tones. Rings of Power star Ismael Cruz Cordova added his own grateful response “With a lot of love,” and Sean Estin (Sam) also joined in with a photo of him wearing a hat of the same design.

But they weren’t the only ones who spoke out. The official “Lord of the Rings” on Prime’s Twitter account later also published his own statement from the actors of the show. Using the hashtag #YouAreAllWelcomeHere and the caption “We stand in solidarity with our line-up,” the new kids in the block shared their collective thoughts in a set of images. “We, the actors of the Ring of Power, stand together in absolute solidarity and against the ruthless racism, threats, harassment and abuse that some of our colleagues of color are subjected to on a daily basis. We refuse to ignore it or tolerate it. “,” the statement began.

“J. R. R. Tolkien created a world that is by definition multicultural,” they continued. “A world in which free people from different races and cultures unite to defeat the forces of evil. The Rings of Power reflect this. Our world has never been completely white, fantasy has never been completely white, Middle-earth is not all white. BIPOC belong to Middle-earth, and they are here to stay.” For those who are not familiar, BIPOC means “black, indigenous and colored people.” It’s hard not to see actors like Cordova (who plays Arondir in Rings of Power) being attacked by people who seem to think that blacks somehow don’t belong in a world that is already completely fictional.

“Finally,— the statement continued in its final image,”all our love and camaraderie goes out to the fans who support us, especially fans of color, who themselves are being attacked simply because they exist in this fandom. We see you, your courage, and endless creativity. Your cosplays, funkams, fan art and ideas make this community richer and remind us of our goal. You are valuable, you are loved and you belong. You are an integral part of the LOTR family – thank you for our backs.”

Extending this support to the BIPOC community within the fandom was certainly a welcome touch, and we hope this should help all the devotees who may have felt isolated seeing attacks on actors like them.

The idea that racism has no place in any fan community deserves to be widely disseminated. “Star Wars” has to deal with this in cases such as Moses Ingram, who continues to suffer from verbal attacks, and “The Lord of the Rings”, unsurprisingly, is also infected. But there is hope that such statements will become the norm, showing fans and stars that everyone is really welcome.

New episodes of the series “The Lord of the Rings: Rings of Power” are released on Fridays on Amazon Prime Video.

Ivan Hall, apparently, trolling Deandra Kana because of assumptions about the...