Home Entertainment The 9 funniest memes of “The Time of Morbin” 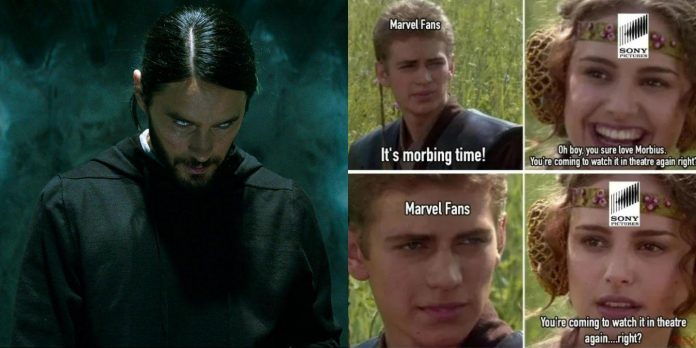 Morbius blew up the box office again after returning to cinemas for the second time. It earned its reissue only after a flood of memes demanded it—and Sony did it. But it’s hard to compensate for the damage from bad reviews to its disappointing box office of 163.8 million (via Box Office Mojo), and memes can’t save the film’s disastrous fate.

Nevertheless, fans continue to remember this Morbius trend – #It’smorbintime. These funny memes continue to poke fun at the film’s flaws, from the silly blue blood oozing from the vampires’ mouths to Jared Leto’s involvement.

This is a reworked format of a popular meme from a scene from “Star Wars: Episode II — Attack of the Clones”. Despite the wave of jokes and memes in which the now infamous phrase has become a trend, it seems no one was actually going to watch Michael Morbius drink blue blood for the second time.

As soon as social networks found out how little money the reissue brought, all bets on memes were removed. Many made fun of how empty the cinemas had to be on the day of the reissue, prompting memes like the one above.

According to Forbes, Morbius earned only 85,000 thousand on the day of the reissue. This led to the assumption that no more than $100 worth of tickets were sold in each cinema.

This funny meme uses the shared universe of Spider-Man and Morbius. Screenshots from the movie “Spider-Man: Far from Home” show how Peter Parker laments that he cannot escape the legacy of Iron Man. However, in this meme, the Iron Man graffiti has been replaced with an iconic scene from the trailer in which Michael Morbius, a living vampire, looks down on the enemy to become a separate meme.

The meme accurately summarizes the experience of many Internet users when they encounter this trend. Wherever they are on the Internet, there is a Morbius meme somewhere. Just when they least expected it, looking through any irrelevant tag, they would probably stumble upon Michael Morbius one way or another.

Morbius is against everything and everywhere and at once

There were also memes that sarcastically claimed that the film was a hit among fans. These mocking memes prompted Sony to re-release the film, guided by erroneous ideas that it would have better numbers.

This meme shows that moviegoers went to watch “Morbius” instead of the A24 movie “Everything Everywhere and at Once”. The irony is that the comedy with the multiverse showed good box office receipts compared to “Morbius”, which turned out to be bad. It should be noted that, at least, Morbius went bankrupt by more than 163 million with an estimated budget of $ 75 million, which is not a complete failure.

This meme highlights another role of Jared Leto in comics. Leto previously played Mr. Jay/Joker in 2016’s Suicide Squad. As a result, the actor received a lot of criticism from fans for his style of acting and remained in the image of “Mr. Jay” throughout his stay on the set.

As you know, it turned out that Jared Leto sent actress Margot Robbie a live rat as a gift, and for quite a long time the incident was perceived negatively.

People also make fun of the Marvel cinematic universe, which may have been holding on to the superhero genre with a stranglehold for a little more than a decade. Since “Iron Man” was released in 2008, Disney has been releasing at least one movie a year based on the Marvel character as part of its “Marvel Phases” strategy.

As for Morbius, he is a Sony-owned character, so his chances in the MCU are slim. But this hilarious meme uses the famous MCU phase planner to enter Morbius on every date — as part of the initial re-release campaign.

In a popular meme format borrowed from the manga “The Man with the Chainsaw”, people introduced their favorite characters who are “terrible!”

Jin shows a new side and shares his routine with ARMY

The Matrix: All Products Based On The Wachowski Saga