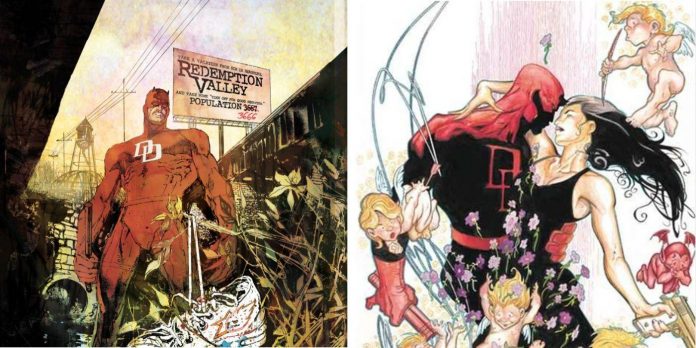 With the news that Daredevil is being reintroduced into the Marvel Cinematic Universe following Netflix’s cancellation of the acclaimed series, a deserved share of the mainstream limelight has been given to the Devil of Hell’s Kitchen. And while his initial TV series was a redemption of sorts following the critically-panned 2003 movie, Daredevil has long since enjoyed some of the most consistently high-quality writing in the source material.

It’s been something of a revolving door of accomplished writers, which means some noteworthy entries fall slightly to the wayside. From Ann Nocenti’s milestone introduction of a longtime villain to David Mack’s tragic romance, there are several underrated modern Daredevil classics.

Part of what makes Matt Murdock and his Daredevil persona so compelling is the religiously philosophical conflict that naturally stems from a God-fearing Catholic lawyer who’s also a vigilante by night. Despite being at odds with each other, those are the two pillars of Daredevil’s being.

RELATED: 20 Reasons Why The Dark Knight Is Still The Best Superhero Movie

David Hine and Michael Gaydos’ Redemption takes some of those themes and shows their ugliest sides, with Matt Murdock hired to defend the young suspects in a boy’s grisly murder in Redemption Valley, Alabama. The young goth/metal-head kids were instantly branded as the culprits given their appearances in a frothingly religious town. Redemption gives a deeply resonating look into the consequences of rabid cultish fanaticism and the persecution that results from it.

A Touch Of Typhoid

Ann Nocenti is a writer who’s deservedly been receiving more retroactive praise from fans online for her tenure on Daredevil. In her long-running stint in the ’80s, Nocenti introduced arguably one of the most inventive Daredevil villains in the form of Typhoid Mary.

She has moderate pyrokinetic powers and a violent case of dissociative identity disorder, and A Touch of Typhoid sees the villain sent after the Man Without Fear to make him fall in love with her before dealing the killing blow. Chaos expectedly ensues, and the story arc was praised for its wild turn of events and the ramifications it brings to Matt’s life.

Parts Of A Hole

This underrated classic might not be so underrated come next year’s Echo series on Disney+, as David Mack and Joe Quesada’s Parts of a Hole might prove to be a source of inspiration for it. It marks the debut of Maya Lopez/Echo, as she’s raised by none other than Kingpin and led to believe Daredevil murdered her father when, of course, it was a hit marked by Fisk himself.

Manipulating Echo as an assassin under false pretenses, Fisk sends her to kill Daredevil before they ultimately fall in love. Parts of a Hole has been praised for its tense premise and the tragic romance at its core, once again using Matt Murdock’s unstable emotional state (as well as Maya’s) to convey the weight behind one of Daredevil’s most personal fights.

The Fall Of The Kingpin

Frank Miller’s seminal Born Again is regarded as an all-time great in comic book history, with the arc proven to be influential source material for Daredevil’s revered third season. That story depicted Matt Murdock as one of the worst places in his life, becoming increasingly unhinged and a grim shell of his former self, with Wilson Fisk as the dark puppet master.

The finale there lived up to its title for the hero, and D.G. Chichester, Lee Weeks, and Al Williamson’s The Fall of the Kingpin is a direct sequel that flips Daredevil and Kingpin’s roles from the preceding arc. After Daredevil triumphantly took back his life and ousted Kingpin for the villain that he is, the latter’s life, power, and influence progressively degrade. While following up on Born Again is a tall order, The Fall of the Kingpin is a narratively satisfying continuation. Seeing Kingpin forced to reap what he sowed here makes Daredevil’s prior rebirth that much more cathartic and well-earned.

The Devil In Cell-Block D

Placed in the daunting position of following up on Brian Bendis and Alex Maleev’s euphoric Daredevil run, writer/artist duo Ed Brubaker and Michael Lark start the next arc in The Devil in Cell-Block D (also titled The Devil, Inside and Out). As hard of a task as that is, Brubaker delivered impressively on the shocking cliffhanger Bendis left Murdock in.

The Devil in Cell-Block D follows the grim events that put Murdock in prison with the likes of Kingpin, Bullseye, and the Punisher with him on Ryker’s Island. However, someone posing as Daredevil is on the outside. Writing believable stakes for Daredevil is a tall order, as the character is known for having misery rained on his life multiple times. That being said, the story and premise of this arc put an enticing spin on Daredevil’s struggles.

The Kingpin has understandably become Daredevil’s most notorious and threatening villain since the superhero and his world have become more mainstream. But star creative duo Ann Nocenti and David Aja (artist of Matt Fraction’s acclaimed Hawkeye run) put together an exhilarating short story involving the Man Without Fear in a heated fight with another one of his most bitter enemies in Bullseye.

This short story sees Bullseye dismantle Daredevil in a vicious street fight, with the latter being nursed back to health by some innocent bystanders. Throughout the hero’s mythos, Bullseye has been responsible for some of the worst things to ever happen to Daredevil and his loved ones. So much so that his heinous crimes against humanity are at least on par with the atrocities Kingpin is responsible for.

Nocenti and Aja pair up once again in Daredevil: Black & White for another short story titled Game Room. This time, the two get creative and twist the comic book formula by using Nocenti’s writing to do most of the short story’s heavy lifting, while Aja’s moody art is presented vaguely to implore readers to imagine the gritty details.

RELATED: 8 Things You Didn’t Know About The Daredevil Series

Game Room follows Daredevil as he tries to investigate an alleged suicide that is suspected of being a case of foul play. Like Batman: Black & White, Game Room makes great use of depicting stories readers might not normally see in mainline comics. The anthology format also makes these concise tales so captivating to read through in succession to see what each creative team has to offer to the character’s lore.

Karen Page’s shocking, tragic, and controversial death in Kevin Smith and Joe Quesada’s Guardian Devil was a seemingly rare case of a comic book publisher sticking to its guns and letting dead characters stay dead in mainline continuity. And whereas that arc was a grim turn of events, Jeph Loeb and the late Tim Sale (both of Batman fame in The Long Halloween and Dark Victory) tell an inspiring and bittersweet story of dealing with loss in Yellow.

It retells the early swashbuckling days of Daredevil’s career and the blossoming romance between Matt Murdock and Karen Page. Blending action with romance, Yellow was well-received as an emotionally charged love letter to the character and the crossing of a somber landmark in his life. Bringing the story back to the present with Matt writing letters to the deceased Karen makes this one of the quieter, but no less worthy Daredevil stories to read and become invested in the highs and lows of his life.

AEW was lucky: Wardlaw pushed to win the TNT Championship