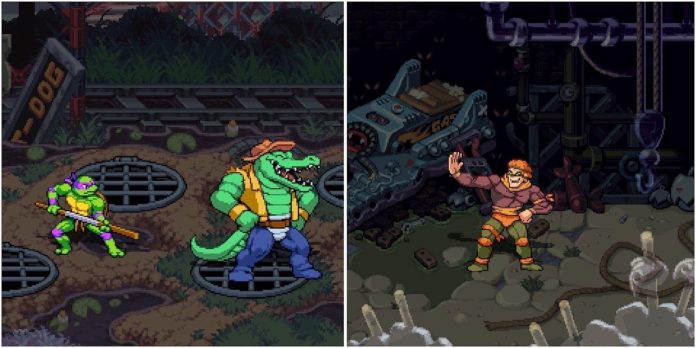 Teenage Mutant Ninja Turtles: Shredder’s Revenge has 16 levels, making it a relatively fast adventure. This should not be surprising, since most fighters are usually short. Even though there are a lot of modern mechanics added to this game, such as level-ups and side quests, it still falls on the shorter side of things.

Despite the fact that Teenage Mutant Ninja Turtles: Shredder’s Revenge is not a long game, it is full of great content. There may be only 16 levels, but there are more bosses in the game. They squeeze them in near the end. Which of the 20-plus bosses in the game is the most fun to fight?

The Rat King is one of the strangest villains in the TMNT series as a whole. He is the boss at the fifth stage, aptly named “King of the Spill”. This is the sewer level, which is a reference to the third stage of “Turtles in Time”. The Rat King was also the boss in this game, he was riding on a motorized hovercraft.

The hovercraft also appears in Shredder’s Revenge. The Rat King will jump on him, summoning packs of rats to attack the players. Here’s a tip — defeat the Rat King with Splinter to get the achievement.

Tempestra is the boss of the sixth stage called “Mall”. This is one of the best stages in Shredder’s Revenge, as you can see a lot of funny jokes here. Tempestra doesn’t fight the player much, instead she summons digital versions of Tokka and Rahzar to do her job.

These characters are from the second feature film, but over time they also got into cartoons. They were also level four bosses in the Turtles in Time game. This stage is like getting three bosses for the price of one.

Wingnut is another dumb character, possibly a parody of Batman. He is a villain in the eighth stage, which is called “Panic in the Sky”. This is a rail stage where players will fly hoverboards, fighting bad guys along the way.

Although he may look silly, Wingnut is a difficult character to beat. One of his seemingly favorite attacks is that he flies across the screen at top speed. It resembles a set of Storm Eagle techniques from Mega Man X. The boss is a fun task, but the scene as a whole is also great.

Leatherhead is a great name for a boss. In the cartoon, he is a southern alligator with a funny, vulgar accent. He is a level nine boss in Shredder’s Revenge, also known as the Coney Island Crisis. This is another beautiful scene as it is filled with tons to see.

What makes this boss unique is that he uses the sewers as traps. Leatherhead will rush into them and jump on unsuspecting players. This is the only stage that also helps players through turtle frog friends. They will race on a roller coaster and throw burning barrels or pizza to the players. It should be noted that Leatherhead was a level eight boss in Turtles in Time.

Baxter Stockman was the first boss in Turtles in Time, and annoying at the same time. He returns in Shredder’s Revenge, albeit much later in the campaign. He is the boss of the 12th stage “He will not fly”.

The action of this level takes place in an underground laboratory, which the heroes will eventually discover. This is a difficult level to navigate because Stockman has built a lot of robots to throw them at players. His fight can be intimidating, and the boss likes to retreat behind the bubble, shooting at players, it’s almost impossible to dodge lasers.

Chrome Drome is a fake. He is the boss of the 13th stage called “Technodrome Redux”. This is the first stage in Dimension X, as well as the first stage with two separate bosses. Halfway through, players will encounter General Traag, an unmemorable stone monster, for the first time. At the end of the stage, a Shredder-like boss will appear, which will eventually turn out to be Chrome Drom.

Chrome Dome is a robotic version of Shredder. He did not appear in “Turtles in Time”, but uses a set of movements similar to the usual Shredder in this game. Players will have to throw ninjas into the camera to weaken this killer robot.

2 The Statue of Tyranny

The final stage in the game “Anger of the Mistress” is not a stage at all. This is a series of two related bosses. That’s OK, as it was a nice change of pace for level 16 in Shredder’s Revenge.

Players must first defeat Krang, who has captured the Statue of Liberty. In the process, he renamed it the Statue of Tyranny. It’s a move straight out of Ghostbusters 2, except this time the villains are running one of this country’s greatest treasures. It’s a pity that the turtles didn’t have fur either. The battle of mechs against mechs could have been more exciting.

Super Shredder is the real final boss of the game, and this is the form he takes in the final of “Turtles in Time”.

The Boys Season 3: Jensen Ackles talks about the traumas of...