Home Entertainment The 5 Best Video Games Based on the TV series of the... 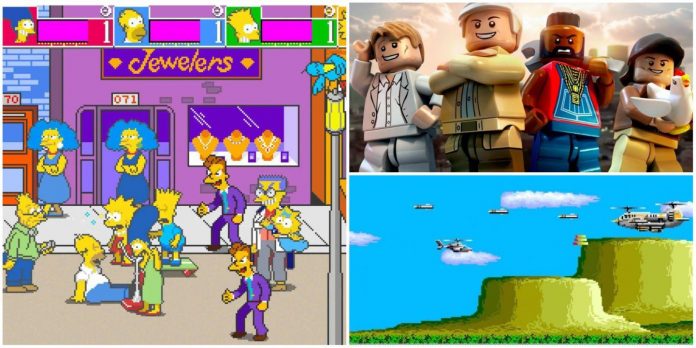 If you grew up in the ‘80s, television must have seemed like a golden age filled with exciting memorable characters, awesome vehicles, and awesome soundtracks. Knight Rider, The A-Team, Magnum P.I. and Miami Vice are just a few series that had a huge number of fans and were loved by viewers around the world. This is a sign that Hollywood recognizes the popularity of these shows, as they have either been remade for the current audience, or have become adaptations for the big screen.

The connections of video games with popular TV shows are inevitable, and there are many of them. The problem is that they are often cheap and not of very good quality. This list will cover the cream of the crop and some of the best examples of video games based on the 80s TV show.

Airwolf aired for 4 seasons from 1984 to 1987. The show told about the adventures of Stringfellow Hawk, played by Ian-Michael Vincent, and a heavily armed Airwolf attack helicopter. As in many TV series of the 80s, the helicopter itself became the same character as the actors.

There have been many Airwolf ports for home consoles and computers, but the arcade version released in 1987 stands out in particular. This side-scrolling shooter gave the player full control of Airwolf, which is what many kids dreamed of when they watched the show. An iconic melody accompanied the action that would excite fans as they faced wave after wave of enemies.

Knightmare was a British children’s television show that ran for 8 seasons between 1987 and 1994. time. The show will tell about 4 children who went in search of escape from the castle of Nightmere, filled with traps and monsters. Using a very early combination of augmented and virtual reality, three children helped another child who was a Dungeon Hunter. The Dungeon Hunter wore a “Helmet of Justice” that hid their surroundings, which meant that it had to be described by another team, which also advised the Dungeon Hunter which way to move. Their only help was a dungeon master named Tregard, who gave hints and advice from time to time.

Although Knightmare was a live-action video game of its kind, there were several versions of the popular TV show for home computers. Released in 1991 for the Commodore Amiga and Atari ST, Knightmare was a first-person dungeon crawler. The game was very similar to popular fantasy games such as Eye of the Beholder and Dungeon Master. Upon release, Knightmare was generally well received by critics, but several questions were asked about its very weak connection to the TV show.

The Simpsons don’t need an introduction, or at least they shouldn’t. Since his humble beginnings, first appearing on the Tracey Ullman Show in 1987, he has become a cultural phenomenon, winning numerous awards and earning millions of dollars. Although some claim that the Simpsons’ best years are behind them, they are still very popular, and their catalog of shows can be viewed on Disney Plus.

Many Simpsons-based games have been released over the years, and The Simpsons Hit & Run is regularly cited as one of the best. But it’s fair that this list revisits where it all started with The Simpsons arcade. As the TV show gained momentum, the arcade game became the first opportunity for gamers to play for their favorite characters. The game was extremely popular and fans spent a fortune making it one of the most profitable arcade games of 1991. This was partly due to the amazing cabinet for 4 players. Konami specialized in this and made other fantastic beat ’em up for 4 players, including Teenage Mutant Ninja Turtles and X-Men.

1 Star Trek: The Next Generation: The Past of the Future

Since “Star Trek” was first shown to the public in 1966, it has captured the imagination of millions of fans and was not going to stop. Lifting the mantle of beloved characters made famous by William Shatner and Leonard Nimoy was no small feat, but “Star Trek: The Next Generation” successfully coped with it and, in turn, created its own memorable characters and legacy. From 1987 to 1994, “The Next Generation” told about the adventures of Captain Jean-Luc Picard and his team as they explored strange new worlds, boldly going where no one has been before.

Eternity and 9 Other Important Cosmic Entities in Marvel Comics