Home Music News The 1975 concert in New York: a damp and noisy night in... 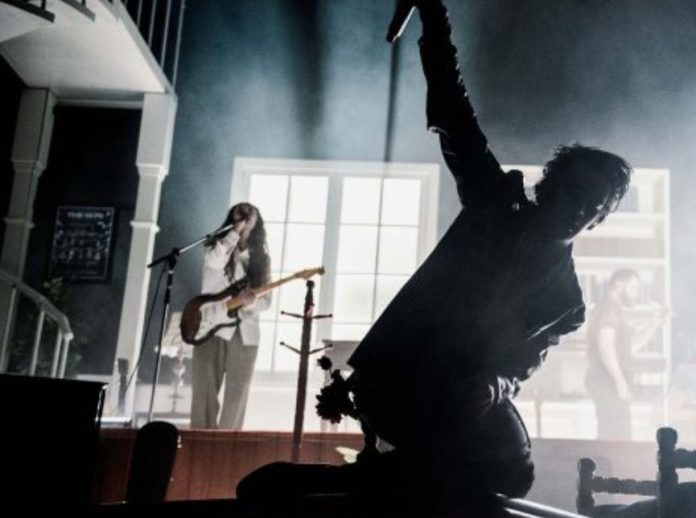 “I’m really sorry if you came with your dad and I touched my dick,” laughs Matty Healy in the middle of filming “New York 1975.” — It’s your fault that you brought your father. Shortly before this comment, the frontman is sitting on the couch, touching himself with one hand and holding a cigarette with the other. He then kneels on stage, takes a piece of raw, bloody steak and unceremoniously bites it off before climbing onto the TV screen. Is this a metaphor for the dangers of consumerism? A border-pushing fusion of live art and music? Before the audience has time to answer these questions and comprehend the stunning moment, the music turns on again.

Theatricality is to be expected from a tour with the ambitious title “At Their Very Best” tour, which becomes apparent at the very beginning of the performance, when a huge curtain falls, showing that the English band has built an incredible two-story house. right in the middle of Madison Square Garden. In between songs, Healy, Adam Hann, Ross MacDonald and George Daniel turn on the lamps, turn off the lights and walk around their transient home, adding comforting little things to the scenery, in which there is nothing subtle.

Constant movement, incessant smoking, sips from a flask and involuntary comments about the state of things (“If I were Kanye, I wouldn’t say anything like that,” Healy tells the crowd at one point) could be a distraction if it was a set of any other band. But this is The 1975, and they’ll get away with it, because the songs are damn good to outshine them.

In the first half of the set, the band presents almost all the tracks from their latest album “Being Funny In A Foreign Language”, and the background is a Garden combined with the energy of fans catching every word of Healy (“It’s called the work of the crowd,” he explains), heard live, each song takes on a new life.

Officially, the evening begins with the opening keys of “The 1975 (Being Funny in a Foreign Language)”, breaking away from the piano and slowly soaring up, hitting everyone in the front row until their noses bleed, while the apologetic words: “I’m sorry.” if you’re alive and you’re seventeen,” circle the meeting place like a mantra. After “Looking For Somebody (To Love)”, the next one begins, with the full effect of the band’s entertainment, and the frontman throwing his guitar as he jumps from an Ottoman bed into a sold-out arena filled with energy, a noisy house party.

It’s rare when the band’s latest songs sound as strong as the hackneyed songs that fans have been listening to for years, but The 1975 easily move from their fifth album to part of the “Greatest Hits” of their set. And in an era when many artists play a set nonstop for lyrical exploration, Healy’s stage notes are appreciated. Before the slow-burning “fallingforyou”, he tells fans, “this house is based on the next song”; before “Love It If We Made It”, he admits that “the meaning of the next song is not to play it”; Later, in anticipation of “Somebody Else”, he tells the audience, “It’s a sad song, but I’m fucking over it.”

— Do you know what’s wrong with us? Healy says that somewhere between performing the 1975 classic “The Sound” and “Sex,” “we just keep getting better, baby.” In addition to bravado, there is still awe in the presence of the band on stage. “Fucking Madison Square Garden, look at us? How the hell sick are we?” — the frontman says with a laugh towards the end of the set, as if the realization of the importance of the moment had just struck him.

After the celebratory rendition of “Give Yourself A Try”, when “The 1975” sends fans back to the streets of Manhattan with the final note that “we are packed, and I do not know how long we can stand it”, an amazing amount of tears and swollen eyes mixed with smirks on the faces of the departing. There is relief in the air. Perhaps this is a cathartic release, in which one can blame sincere stage banter, the breaking of Healy’s voice during “I Love It If We Made It” or the therapeutic consequences of a joyful dance to sad songs.

Corey Taylor on his sobriety: “You quickly realize what a part...

Kelly Rowland responded to the radio host’s suggestion that she plays...