Home Tech The 12-year-old boy sold his NFT work for an astonishing price! 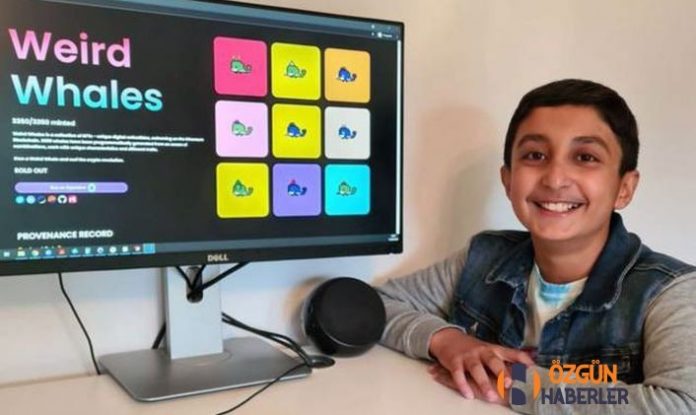 The NFT craze is in full swing. This time, the owner of the designs is a 12-year-old boy and he sold the artwork for an astonishing price. Benyamin Ahmed, 12, living in London, designed NFTs during school holidays. He developed a series of pixelated artwork called Weird Whales.

Weird Whales is Ahmed’s second digital art collection after a previous series inspired by the lesser-selling Minecraft. This time it was inspired by a familiar pixelated whale image and a popular digital art style. However, he created a collection of 3,350 emoji type whales using his own program.

Ahmed sold his work, Weird Whales, for approximately 400,000 dollars. NFTs generally do not give the buyer the actual artwork or copyright. However, these immutable tokens have been very popular in recent years. Benyamin Ahmed, 12, keeps his earnings with the cryptocurrency Ethereum.

Meanwhile, Benjamin Ahmed is already working on his third superhero-themed NFT collection. He also wants to make an “underwater game” involving whales. His father, Imran Ahmed, is confident that his son is not breaking copyright law. However, he hired lawyers to oversee his work and received advice on how to brand his own designs.

Speaking to the BBC, the student said, “My advice to other kids who want to enter this field is not to force yourself to code. Just do the best you can.” said. Benjamin’s father, Imran, is a software developer working in finance. Imran Ahmed encouraged Benjamin and his brother Yousef to start coding at the age of five and six. Children had a great advantage in this regard.

Imran Ahmed said, “It was a bit of a fun exercise but I realized very early on that they were really good. They practiced coding for 20 or 30 minutes a day, including holidays.” he said.

The art world is split about the current trend in the NFT market. Artists say they are a useful additional income. But there are also doubts as to whether these are a realistic long-term investment. “The idea of ​​buying something that doesn’t exist is weird,” Christie’s auctioneer Charles Allsopp told BBC News. said.