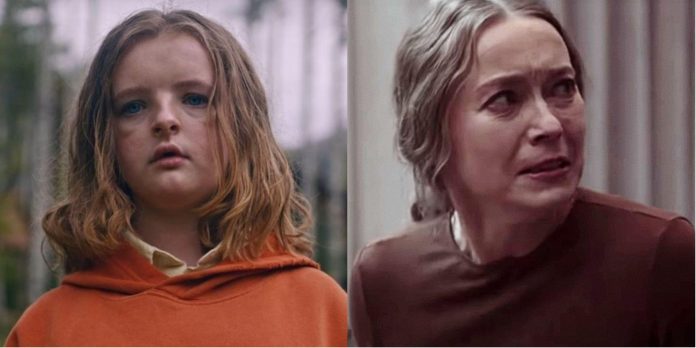 Many horror movies feature disturbing deaths which linger with the viewer after the credits roll. Some of these deaths are so chilling because they come as a total surprise like Charlie’s from Hereditary.

In some cases, horror movies open with chilling deaths to set the tone from the off – like with Dani’s family in Midsommar – but in other instances a main character is given a particularly cruel ending, such as Jenny in Eden Lake. Some of the most disturbing deaths in fiction come from the horror movie genre.

Kate is one of the main protagonists in Fear Street 1994 and she is the one to realize the group can stop the undead killers if Sam sacrifices herself. After being stabbed in the stomach, Kate is sent head first through a bread slicer in a gruesome and shocking scene.

On her death, Redditor OakScruff says “I guess I just didn’t expect her to die so brutally. I kept waiting for her to get saved and it never happened.” As she is a main character within the movie, the viewer is still expecting her to be saved right up until the last moment. The brutality of Kate’s death and the speed with which it happens makes it jaw dropping, especially considering the movie developed a romance between her and Josh.

Midsommar has one of the best horror movie openings as it immediately sets the tone for the horrifying events that follow. The movie opens with the disturbing murder-suicide of Dani’s sister and parents. Redditor dinkydez puts this forward as one of the most disturbing horror movie deaths saying, “Just the pure shock and simplicity of the scene. Of course, the infamous suicide start of Midsommer had the same impact on me.”

While the viewer never gets to know any of these characters, opening with this scene is chilling. These deaths also set up the main events of the story and begin the dark journey Dani goes on throughout the movie.

One of the best death scenes from Final Destination  is Ashley and Ashlyn’s where they are burned alive by tanning beds. Redditor Crusader1987 states, “two girls burned to death in their tanning beds, hence why I will never go near one.”

The Final Destination movies often take mundane situations like this one and make them horrifying. Although they are often built up to, the deaths themselves are often gruesome yet fast in the series. However, Ashley and Ashlyn are slowly burned to death as they scream out in pain and the transition from the tanning beds to their coffins is a chilling final touch.

The Mist ends with a particularly tragic scene as the main character kills his friends and his young son to save them from the creatures in the mist. However, the army then arrives to clear the mist and fight the monsters in a cruel twist of fate.

Redditor old_mcfartigan says, “the guy’s kid at the end of the Mist” is the most disturbing death in particular. David kills his young son in order to save him from an even worse fate so it’s horrifying to see this was for nothing. The final moments are tragic as David doesn’t have any bullets left and is left to contemplate what he’s done.

Three friends are backpacking in Australia when they are targeted by a sadistic killer in Wolf Creek. Redditor ScientistAsHero suggests “Liz from Wolf Creek” has one of the most disturbing deaths in horror.

Liz is preparing to escape when Mick stabs her in the spine and she is left paralysed, with him disgustingly describing her as a ‘head on a stick.’ It’s heavily implied that Mick will keep her there, doing heinous things until she eventually bleeds out. The killer’s pure joy as he inflicts this pain on Liz is what makes her ending so terrifying.

Some of the characters from The Descent end up meeting a grisly end at the hands of the monstrous Crawlers; however, Beth’s death is more drawn out and unsettling. Redditor KelanYoung says, “Arguably the most likeable character. First, she gets stabbed through the throat in a horrible accident. Then survives long enough to have her skull crushed in an act of mercy to spare her from the Crawlers. Just horrible.”

Beth is accidentally stabbed in the neck by her friend, Juno, and then left to the mercy of The Crawlers. She is eventually found by Sarah who agrees to end her suffering. This death is so disturbing as it is drawn out and even though she is being pursued by monstrous predators, it is Beth’s own friends who kill her.

Hereditary is one of the scariest horror movies according to Reddit and a major factor in this is Charlie’s death. About this death, Redditor Cynnric says, “It was the way her brother just laid there, broken and empty, while their mother discovered the body and started screaming. It was very raw and made me feel the loss.”

Charlie’s decapitation comes out of nowhere; one minute her brother is trying to get her to the hospital and the next her head has been severed by a telephone pole. The movie’s marketing deceives fans into thinking she’s a main character within the movie even though her death actually drives the narrative. The family’s reactions which follow are equally unnerving and cement Charlie’s death as one of the most horrific.

Olga’s death in Suspiria is a bizarre and grotesque scene in the movie. Speaking about this, Redditor Fout99 says, “The whole sequence is brutal and top tier. Extremely rough to watch.”

RELATED: 5 Ways The Original Suspiria Movie Is The Best (& 5 Ways The Remake Is Better)

The character is locked in a mirrored room as Susie performs a dance in the room above. Olga’s body is somehow linked to Susie and, as the latter dances, the former’s joints begin to twist and contort. The death is brutal and the cutting between Olga’s twisting body and Susie’s dance makes it even more disconcerting to watch.

Another horrifying moment from Midsommar is when Dani and her friends are introduced to the Harga’s practise of Ättestupa in which their elders throw themselves off a cliff when they reach the age of 72. Redditor Natemare_Flix states, “The Ättestupa deaths in Midsommar bother me every time.”

The scene doesn’t make it entirely clear what is happening until the first elder actually jumps from the cliff. That being said, the most disturbing element here comes when the second elder jumps but survives. The others then mercy-kill him by smashing his head with a mallet; the graphic nature of the scene and the silence which follow definitely make for a disturbing horror movie death.

Jenny from Eden Lake is one of the best horror movie final girls from the 2000s but unfortunately doesn’t make it out alive. The closing moments of the movie see Jenny trapped in a bathroom with the fathers’ of her teen attackers.

Redditor LiriStorm discusses the cruel nature of Jenny’s death by saying, “After everything she suffered, it ends like that for her?” Her boyfriend dies earlier in the movie and she is forced to fight for her survival. The fact the audience doesn’t actually see anything after the bathroom door closes but hear Jenny’s screams make this all the more disturbing as it leaves them to imagine what could be happening to her.

Lionsgate Uses Deepface Technology to Remove More Than 30 F-Bombs for...