Home Entertainment The 10 funniest TikTok about season 4 of the TV series “stranger... 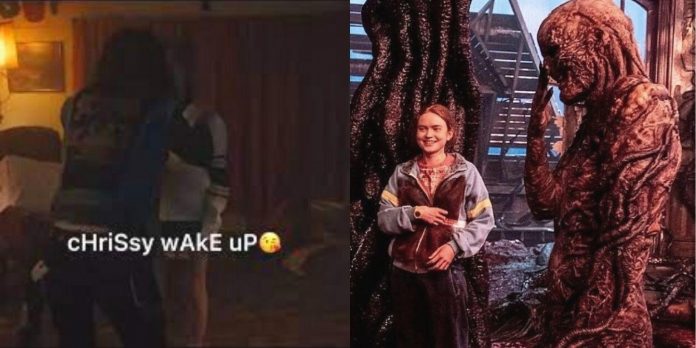 Though the second volume of Stranger Things was released on Netflix only last week, fans have been on the ball all season long with creative and spot-on TikTok ideas. These edited videos are perfect for fans who still cannot stop thinking about the heartbreaking finale and need more dose of Stranger Things content.

Fans of the series have proven to be quite creative in the realm of memes and funny spins on popular show moments, ranging from new tunes to the “Chrissy, wake up” scene to Dustin’s comedic chops. Whether TikTok users are fans of the show or not, the content hasn’t stopped showing up on everyone’s “for you” pages, and honestly, no one is complaining.

Eddie Does Get Mad

Chances are, whether a TikTok user has watched the show or not, they have at least heard of Eddie and his immense impact in season 4. Unfortunately for Eddie stans everywhere, he is presumed to be dead after being attacked by a gang of Demobats, causing him to bleed out.

TikTok user @madelynsgolden made a compilation of all the times Eddie got playfully mad in response to Dustin telling Eddie’s uncle how great of a man he was and how he’s never seen him get mad. While that wasn’t necessarily a true statement, fans very much appreciated the heartfelt sentiment and meaningful conversation between Dustin and Mr. Munson.

Throughout the series, Nancy is constantly catching people off guard with her intelligence and real-world skills. She initially had the reputation as a prissy and popular girly girl, but she has since proven that she’s deeper than that.

TikTok comedian @jahhhmere made a hilarious comparison between the boys’ battle skills versus Nancy’s practical skills. Nancy has owned multiple heavy-duty guns over the years, and time and time again, she has let people know that she’s no novice at handling these firearms, with an aim that’s almost always dead-on.

Though Vecna is arguably the most terrifying villain in Stranger Things so far, the internet somehow developed a crush on him. It’s no secret that the actor who plays Vecna, Jamie Campbell Bower, is a dreamboat, but fans are even making edits for his most villainous form.

User @camri.elyse put together an edit of Jamie’s most hilarious and cute moments in addition to some hilarious behind-the-scenes shots, like Vecna enjoying a Starbucks drink in his full gear. Though many fans have been plotting what song would be their escape from Vecna’s curse, some fans are going as far as to say they want nothing more than for Vecna to capture them.

Since the very beginning of Stranger Things, Steve has been beloved by superfans of the show. Between Steve’s best traits of charisma and sense of humor and his luscious and flowing hair, it’s no wonder why he’s a crowd favorite.

TikTok user @chalmalabingbong channeled their deep love for Steve into quite a brutal game of “would you rather,” although many can’t entirely blame them for their final decision. It is better to just do it and ask for forgiveness later, and besides, the bestie would most definitely understand.

Dustin Carried Season 4 On His Back Comedically

Though viewers always knew Dustin was one of the funniest of the group, he got to shine in seasons 3 and 4 while separated from his friends. Fans were glad, in a way, that Dustin has had several opportunities to part ways with his best friends in an effort to find himself and execute his various plans with Steve instead.

RELATED: 10 Quotes That Prove Dustin Was The Smartest In Stranger Things

User @eddie_supremacy made a compilation of Dustin’s best moments in season 4 with additional captions and commentary over the scenes, and it really highlights just how much of the comedic relief is dependent on Dustin, especially with Steve – a power duo that all fans have grown to love.

Back when season 1 first premiered, fans were going crazy with memes and imitations of the dramatic way El used her powers. Though some fans believe Eleven hasn’t had much of a character arc so far, this video proves just how much she’s grown since the earlier days.

The video meme created by TikTok user @totallydarthvader really stresses how Eleven used to act, mainly in season 1, when she didn’t have much of a wide range of vocabulary or social skills. Regardless, fans are glad that El has matured a bit and is finding her way.

Kind Of Sad About Papa

Dr. Brenner, aka Papa, is known for being quite a conflicting character, especially in terms of his relationship with Eleven. There are quite a few times he has proven to be sketchy and betrayed her trust while, at other times, he has done quite honorable things to protect her, like carrying her out of danger from the military to save her life and losing his life in the process.

TikTok user @kittycait00 stressed the internal conflict all viewers have about Dr. Brenner. On one hand, he’s a clear master manipulator, but on the other hand, fans wonder if maybe deep down he really did try to do what was best for El.

Murray Is The Ultimate Wingman

While fans could obviously sense the romantic tension happening between Hopper and Joyce for a while now, Murray was the first to be vocal about it with the two. Although he confronted them in a semi-joking manner, he said what all fans were thinking, though Joyce and Hopper were both in denial about it in season 3.

RELATED: 8 Memes That Perfectly Sum Up Stranger Things’ Murray As A Character

TikTok user @leexxzii made a hilarious video meme that almost predicts what fans are sure to see happen in season 5 once Murray finds out. Sometimes, it just takes rescuing a loved one from kidnapping to make them realize their feelings for each other.

So Many Top Tier Volume 2 Memes

From Steve’s embarrassing confession to Nancy about having six kids with her to Eddie arguing with Robin about the definition of “real music,” Stranger Things is filled with some quite interesting and hilarious dialogue that is perfect meme material. With the show getting more and more comedic as the seasons continue, sometimes all fans need is some necessary comedic relief to distract them from the chaos of the Upside Down.

User @flochodile compiled a bunch of popular viral videos, TikToks, and even old Vines that perfectly sum up hilarious situations in season 4. Internet meme culture has proven to provide social media users with some of the most entertaining content, and it never gets old, especially when updated and applied to the context of new tv shows and movies.

Possibly, the most recognizable trend of all from this season has users duetting and making TikToks to this fanmade song. What was quite a scary moment in the show easily turned into one of the catchiest TikTok beats of the year.

The Broadway-style tune was created by user @schmoyoho and immediately caught the attention of fans everywhere. Not only has the original sound been used in over 44K TikToks already, but the song is so widely known that the original video has over 16.5M views.