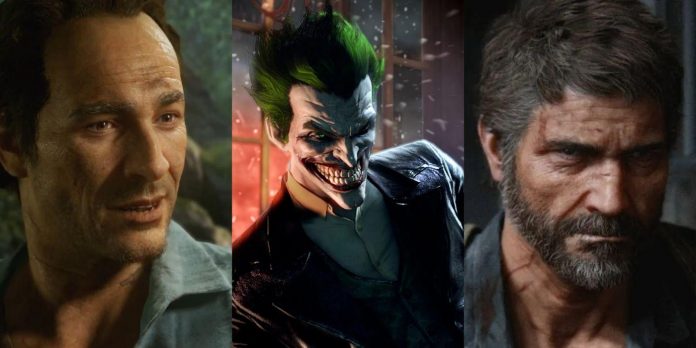 Troy Baker has led a storied voice-acting career in the video game industry, with one of the most prolific games he’s been a part of getting a remake in the form of The Last of Us Part I.  However, Baker has had many prolific roles in gaming for over a decade now.

For fans of the medium, he’s considered a household name alongside the likes of fellow industry veterans such as Nolan North, Laura Bailey and Jennifer Hale. From iconic characters in DC’s Batman corner of the universe to the aforementioned The Last of Us series, Troy Baker has many voice roles that will stand the test of time in the medium.

The first two BioShock games leaned into elements of survival-horror, with Infinite a more adventurous but no less grim tale of alternate history. In terms of characters, Elizabeth is regarded as the one that stays in players’ minds the most, but Troy Baker’s performance as protagonist Booker DeWitt was no less praised.

He gives some great lines of dialogue and Booker’s tragic origins and importance to the story in relation to Elizabeth and the villainous Zachary Hale Comstock are thoroughly compelling throughout. His performance is a great contribution to a game that balances gripping, thought-provoking concepts with character-driven story arcs.

During the tail end of the PlayStation 3 generation, Naughty Dog’s The Last of Us served as the console’s swansong. The game was released to widespread critical acclaim and expectedly spawned a series as well as a live-action The Last of Us HBO show.

It was lauded for being an exceptional, story-driven game, and that was in large part thanks to the stellar roles of Joel and Ellie. Troy Baker expertly portrays Joel with a grizzled and tortured atmosphere, as well as emphasizing his melancholy nature and moral ambiguity. It’s a role that will arguably go down as his most memorable.

It’s a tall order to deliver a memorable Joker voice performance knowing the gold standard that the legendary Mark Hamill set. However, Baker put on an admirable and believable show as the infamous Clown Prince of Crime in WB Games Montréal’s prequel Batman: Arkham Origins.

This portrayal of the Joker was excitingly fitting of an early-year version of the villain opposite Roger Craig Smith’s equally compelling Batman. It was an honorable portrayal and rendition of Hamill’s beloved iteration in what’s arguably the most underrated, yet flawed Batman game.

Before The Last of Us (but after Crash Bandicoot), Naughty Dog made itself known for the acclaimed and swashbuckling Uncharted series starring Nolan North’s Nathan Drake. The series has been praised for its adventurous Indiana Jones-like atmosphere, and Troy Baker made his mark on the franchise with his portrayal of Nate’s brother Sam Drake in A Thief’s End and The Lost Legacy.

He gives Sam a lovable and suave personality, as well as a sympathetic backstory, if initially mysterious. The way Baker’s performance seamlessly bounces off of North’s Nathan makes for an irresistible and heartwarming dynamic.

Arkham Origins wouldn’t be the last place that Troy Baker would feature in a major role for the series. He returned to play the conflicted antagonist of Arkham Knight as the titular enforcer.

While his true identity as the Red Hood/Jason Todd. the second Robin,  wasn’t nearly the surprise that Rocksteady tried to make it out to be, his role in the story and Baker’s performance as him were nonetheless impactful. The pained and strained relationship between him and his surrogate father was palpable and integral to the plot, and part of the reason Arkham Knight is one of the best modern superhero games.

While there was controversy behind the scenes of Metal Gear Solid V: The Phantom Pain’s development and execution of the story, the game was nonetheless a hit from a stealth-action perspective.

It also featured some memorable character performances, one of which being Baker’s as the famous Revolver Ocelot. Though he ventures into villainy later in the series’ timeline, Baker accentuates the veteran nature of the character with an air of confidence. Revolver Ocelot maintains a sense of intelligence and charm throughout his fight alongside Venom Snake.

Rounding out Troy Baker’s catalog of Batman-related roles is his performance as the titular Dark Knight in the Telltale Games series. The games were overall well-received for their creativity in the DC sandbox, flipping conventional Batman lore on its head.

Baker brings a more youthful and smooth performance as Bruce Wayne and Batman in a world that’s no less dripping with a comic book aesthetic and tone. Seeing Baker’s take on Batman within the several directions players can shape his story was a breath of fresh air for a superhero character with so many incarnations.

Rhys (Tales From The Borderlands)

Baker is featured in another leading role in a Telltale Games title. He stars as protagonist Rhys in Tales from the Borderlands, which is a colorful side story within the larger and iconic first-person shooter series. Borderlands is widely known for its vintage brand of dark meta-humor, and Baker’s performance alongside the rest of the main cast will feel right at home with this spin-off entry.

Rhys is depicted as flawed, but still genuinely likable and sympathetic. In his adventures with his companions to find the Vault Key, he also undergoes a satisfying and emotional character arc, helping give this bombastic world a heart.

Ubisoft’s Far Cry series has become known for its villains, particularly since the critically acclaimed Far Cry 3. It’s another big ask considering the high bar that Michael Mando set with the psychopathic, erratic Vaas in the latter game, but if there was anyone that could put up a worthy antagonistic performance, it’s Baker’s Pagan Min.

Pagan Min is notably more composed on the surface compared to Vaas, but he’s his own brand of a psychopath. That calmness brings forth his own imposing presence, making each encounter an intense one.

Middle-earth: Shadow of Mordor and War were both exciting new takes on legendary author and father of the fantasy genre J. R. R. Tolkien. It brought things down to a more grounded, dark-fantasy-like setting in a pair of alternate-timeline tales. Baker plays the protagonist Talion, in a duology that starts as a gritty revenge epic.

The story’s tone becoming darker than what The Lord of the Rings is normally used to was well-received, though, the plot itself was critiqued for being too straightforward as a revenge story. Nonetheless, Baker puts on a convincing performance as an angry, hard-boiled, and gruff protagonist.

Steve Carell recalls his first thoughts about minions when he read...

Rumor: The State of Play event will take place next week