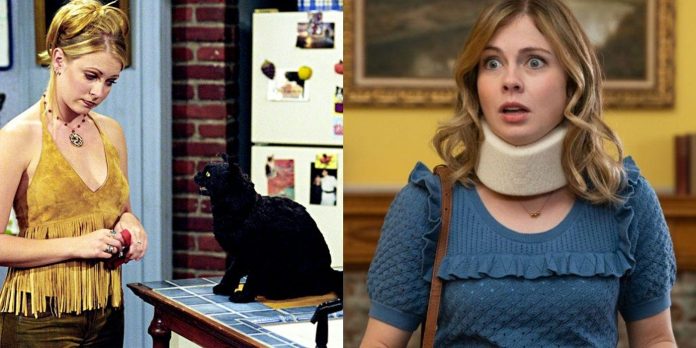 Releasing on Netflix on July 8, 2022, the new supernatural comedy miniseries Boo, Bitch, chronicles the teenage exploits of Erika (Lana Condor) after waking one morning to realize she is a ghost. With her best friend Gia at her side to help her navigate the ethereal plane as well as the horrors of high school, Erika finds a new lease on life and begins embracing her newfound existence.

Boo, Bitch joins a fecund crop of hilarious, often teen-centric TV shows that explore the notion of death, the afterlife, what it means to be a deceased spirit roaming Earth among the living, and more.

The first show that leaps to mind when seeing Boo, Bitch is Sabrina, The Teenage Witch, the wildly popular ’90s TV show starring Melissa Joan Hart. The story follows Sabrina, a 16-year-old who learns she is a witch with magical powers and must rely on her two wise and wicked aunts to guide her through the adjustment period.

If one swapped teenage Erika’s identity in Boo, Bitch as a ghost with a witch, the same basic situational comedy premise shines through brightly as a metaphor for a coming-0f-age rite of passage. Both Erika and Sabrina use their newfound sense of empowerment to foster a new identity, which helps them both handle the pressures of high school in extremely funny yet relatable ways.

While the British version that inspired it is also worth watching, the American version of Ghosts continues to be a surprising hit sitcom for CBS due to its excellent cast and how genuinely funny its central premise is. The plot follows a young couple that is tormented by generations of deceased spirits who inhabit their newly purchased dream home, forcing them to cohabitate with the ghosts as the house continues to fall apart.

With the hysterical iZombie actress Rose McIver leading the charge alongside Utkarsh Ambudkar, Ghosts is a delightfully witty and charming show is at its best when all eight ghosts from different time periods commingle with each other as well as the main living couple, poking fun at the absurdities of life in the 21st century in genuinely amusing and well-observed ways. Aside from the obvious parallels in plot and lighthearted tone, Ghosts and Boo, Bitch are, at its core, about the profound bond between two loved ones.

Those looking for an awesome international companion piece to watch with Boo, Bitch ought to tune into the acclaimed Korean series Bring It On, Ghost. The cheeky premise concerns Park Bong-pal (Ok Taec-Yeon), a teenager who uses his ability to see ghosts to serve as a local exorcist. When a cryptic case brings him to a haunted high school, Park joins forces with a ghost named Kim (Kim So-Hyun), and the two on ghost-hunting adventures while solving the mysteries around Kim’s past.

A brilliant fusion of comedy, fantasy, horror, and romance with a terrific female lead at its center, Bring It On, Ghost ultimately becomes a genuinely tender and touching tale of kindred spirits from different existential planes who rely on one another to make sense of their shared experience.

Another pitch-perfect teenage supernatural comedy to watch with Boo, Bitch includes Dead Gorgeous, a British/Australian series that revolves around three sisters who died in a tragic accident only to return 150 years later to find their house has been turned into a stuffy private boarding school. Unable to tell anyone their secret, the normal-appearing ghosts attend the private school and adjust to modern living.

A classic fish-out-of-water premise that Boo, Bitch also heavily relies on for its central comedic conceit, Dead Gorgeous is clearly geared toward a younger female demographic. The sisterly bond between the charming three siblings goes a long way in compelling viewers and making them imagine what they would do differently if given a chance to roam the afterlife.

Boasting a similar teenage tone and temperament as Boo, Bitch, the Netflix original series Julie and the Phantoms is also a coming-of-age tale in which the protagonists foster a new identity as a direct result of communicating with the deceased. The plot follows Julie (Madison Reyes), a wannabe rocker who, following the death of her mother, summons the spirits of deceased band members and soon becomes the lead singer of their revived group, The Phantoms.

As Julie goes on a series of ghostly misadventures with her new band, she finds her voice, gains more confidence, and even gets into a love triangle with two of her apparitional bandmates, all of which add up to honor her mother’s legacy in the end. Julie and the Phantoms is loaded with strong characters and memorable quotes, and many of the same themes proliferate in Boo, Bitch.

Another show simpatico to Boo, Bitch, Deadbeat stars Tyler Labine as Kevin, a stoner who claims to be a medium who can see and talk to the dead. Using his skills to help unrestful ghosts find closure, Kevin gets into one hilarious mishap after another while encountering aggrieved ghosts of every stripe.

Applauded for its droll interactions between Kevin and the eclectic skein of ghosts, wild storylines that go bizarre places most sitcoms are afraid to, and what the show says about fostering a fake identity for one’s so-called gain. Identity, image, and second chance makeovers as it relates to the deceased are also giant themes in Boo, Bitch.

BBC’s Being Human hilariously imagines what would happen if a werewolf, vampire, and ghost all lived under the same roof. And much like Ghosts, the British series Being Human was remade for American audiences, with both versions having their own recommendable comedic merit.

The classic fish-out-of-water conceit finds ghostly Annie (Andrea Riseborough) attempting to live a normal life with baleful bloodsucker John (Guy Flanagan) and lethal lycanthrope George (Russell Tovey), leading to a wildly entertaining with the living and the deceased that brilliantly balances the macabre with the sharply-written provocations of what it truly means to be human.

One of the most refreshing takes on the afterlife includes Bryan Fuller’s Dead Like Me. The story follows college dropout Georgia Lass (Ellen Muth), a young office temp who dies after being hit by a toilet seat that fell from a space station. When she comes to and realizes she’s been given a second chance on Earth as a grim reaper, a thankless job, Georgia must adjust to her new calling and find happiness the best way she can.

Beyond functioning as another highly-acclaimed TV show about ghosts anchored by a strong female lead, Dead Like Me is fiendishly creative in its mixture of dark humor, lighthearted fantasy, and the profound statements it makes on female empowerment in the professional workplace.

Boo, Bitch fans are sure to get a kick out of the beloved Australian comedy series Spirited, which finds a dentist named Suzy (Claudia Karvan) living in an apartment complex with the outmoded ghost of a 1980s British rocker named Henry Mallet (Matt King), who only she can see and communicate with.

Along with her teenage son Elvis (Louis Fowler) and eight-year-old daughter Verity (Charlie Hancock), Suzy attempts to get over her failed marriage while forming new romances, Spirited combines heartfelt humor with dramatic pathos that will resonate with uses the afterlife as a way to revive Suzy’s dispirited morale.

Since Boo, Bitch was co-created by Lauren Iungerich, it makes sense to recommend another one of her similar TV shows to get a sense of what sort of comedic sensibilities to expect. The most germane series in this regard has to be Awkward, the extremely funny yet painfully uncomfortable look at Jenna Hamilton’s (Ashley Rickards) experience as an unpopular 15-year-old dealing with the horrors of high school.

Just like Erika in Boo, Bitch, things drastically change for Jenna when her classmates mistake one of her accidental mishaps for a suicide attempt, completely altering the social dynamic as she finds sympathy, popularity, newfound confidence, fulfilling romance, and more. An insightfully entertaining look at female high school life from the same creative mind, being this Awkward has never felt better.

Gearbox Announces Its Own Conference for E3 2021