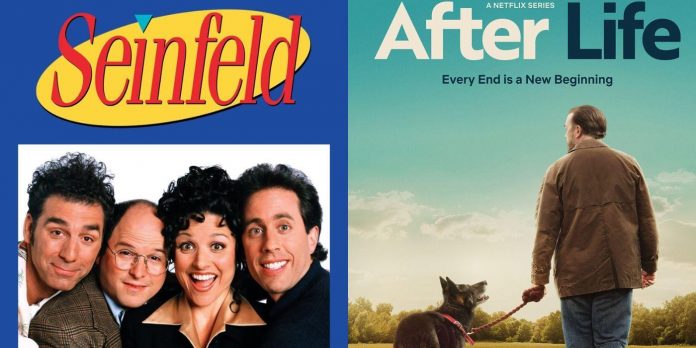 It’s hard to believe Seinfeld, a comedy marketed as “a show about nothing,” stayed on the air for nine seasons and is one of the biggest sitcoms of all time. Had the show been created today, it most likely wouldn’t have gotten made since television tends to be all about big storylines and adventures.

And while the TV of today has its fair share of gems, there is an audience of TV fans out there who miss the old days when shows were simply about mundane life moments. While there aren’t a lot of shows about nothing out there that are worth the watch, there is a handful that will not only make fans laugh but will have them wishing for the “slice of life” genre to come back.

After Life is a dark comedy that aired for three seasons on Netflix and was created by Ricky Gervais. After losing his wife to cancer, Tony’s life has taken a turn for the worse, and he contemplates ending his own life. However, he has a change of heart and decides to take his frustrations out on everyone around him because he thinks life has no meaning anymore.

Most of the episodes in After Life follow a similar structure with Tony going to work, getting assigned to write some weird story about a townsperson that he ultimately ends up insulting before he goes to visit his wife’s gravesite and later his father, who suffers from dementia. It’s not the most exciting storyline, but Tony and the other characters’ personalities make up for it.

Bob’s Burgers may be one of the best animated shows of all time, but that doesn’t save it from being a show that’s basically about nothing. The animated sitcom follows the Belcher family, who own the local burger restaurant they also happen to live above. Each episode follows the misfit Belcher family on their various adventures, such as Bob teaching Linda how to drive to Linda becoming the kids’ swim instructor for PE.

While there is always plenty of hijinks and comedy going on in Bob’s Burgers, the storylines are actually rather mundane. The problems of the episode are usually fixed, and the characters rarely change, as is commonplace in comedies, and yet the show continues to draw in fans year after year.

After helping create the infamous show about nothing, Larry David created his own show about nothing titled Curb Your Enthusiasm. The improvisational comedy series follows David as he plays a fictionalized version of himself as he regularly finds himself in uncomfortable situations, largely due to his own ignorance.

The best part is that while the show is about nothing, it’s about an absurd sort of nothing. In fact, one of the best episodes of Curb Your Enthusiasm centers around Larry starting a coffee shop just to piss off an old rival. With eleven seasons spanning two decades, it’s clear that there are fans that want to watch a “show about nothing,” even in today’s age of action-packed TV shows.

It’s uncommon for dramas to be “about nothing,” and yet the cult-classic WB/CW drama series Gilmore Girls manages to fit into the category perfectly. Set in Stars Hollow, Connecticut, the series centered on the mother-daughter duo known as Lorelai and Rory Gilmore. Lorelai juggles raising her daughter with running the town’s bed-and-breakfast.

RELATED: The Most Memorable Gilmore Girls Quotes, According To Ranker

While the characters in the Amy Sherman-Palladino series might talk a mile a minute, the storylines move much slower and often feel like nothing ever really happens.

It’s Always Sunny In Philadelphia is quickly on its way to becoming one of the longest-running live-action sitcoms of all time despite the fact the show is largely about nothing. The show centers around the selfish owners of Paddy’s Pub, who have affectionately dubbed themselves “The Gang.”

Like most absurd sitcoms, each episode revolves around “The Gang” getting into some kind of hijinks that is resolved by the end of the episode, like faking funerals or trying to game the system for more money. Despite none of their schemes working, the characters learn nothing and continue to do the same old thing episode after episode.

New Girl might be one of the best sitcoms of the 2010s, but its heartwarming characters can’t save it from the fact that show doesn’t have a lot actually going on. The series begins when Jess answers a roommate ad in the paper after breaking up with her cheating boyfriend. Unbeknownst to her, the available loft is in a shared apartment with three other men.

While New Girl has two of the best will-they, won’t-they couples of all time, not even their tumultuous relationship highs and lows can save the show from the reality that most of the episodes are about nothing.

Marketed as “a show about nothing,” Seinfeld truly pioneered the genre and proved that there are audiences out there that just want to watch characters go through silly, mundane life tasks. Set in New York City, the sitcom centers around four single friends who are all trying to make it through the day.

RELATED: 10 Storylines Only Seinfeld Could Do

Unlike other sitcoms, which pride themselves on complex storylines, Seinfeld truly doubled down on the mundane. An entire episode took place in the lobby of a Chinese restaurant as the characters waited for a table, while another centered around Jerry trying to get a girl to break up with him by talking in a silly voice.

Friends is one of the best sitcoms of all time, and even though it’s slightly dated now, the show continues to acquire new fans thanks to streaming and reruns. The series follows six young adults friends living in Manhattan, New York City. As they struggle with life and love, the group grows closer, proving that friends really are family when one is in their twenties.

Though the characters in Friends did have character arcs, and they did go through changes over the ten seasons the show was on the air. However, many best Friends episodes were about nothing at all, such as the one where the gang is trying to get ready for Ross’s award ceremony or the one where they’re trying to win the lottery.

The King of Queens is an underrated sitcom despite consisting of a pretty hilarious core cast of comedic actors. The series centers around Doug, a UPS employee, and his wife Carrie, who share their home with Carrie’s aging father, that is constantly getting into trouble.

The sitcom draws heavy inspiration from 1950s television shows which is why episodes revolve around mundane life tasks earning the series a spot in the “shows about nothing” category. Episodes included Doug dealing with life while his company is on strike and grocery shopping with an unreasonable Arthur.

The Office may have pioneered the modern mockumentary style that has come to dominate comedy television, but not even its groundbreaking storytelling style can save it from the fact that, at its core, it’s a show about nothing. Adapted from the British series of the same name, The Office follows the lives of the staff members of a paper company that is headed by the incompetent but usually well-meaning boss Michael Scott.

While characters and relationships do grow on The Office, they do so in a slow manner since the episodes revolve more around the various hijinks going on around the office. From episodes around the esteemed “pretzel day” to the fan-favorite Dundie Awards, The Office managed to make working in an office building seem fun.

Persona 5 Royal: How to Get a Real Ending