Home Entertainment The 10 Best Teams Joined by Wolverine in Comics 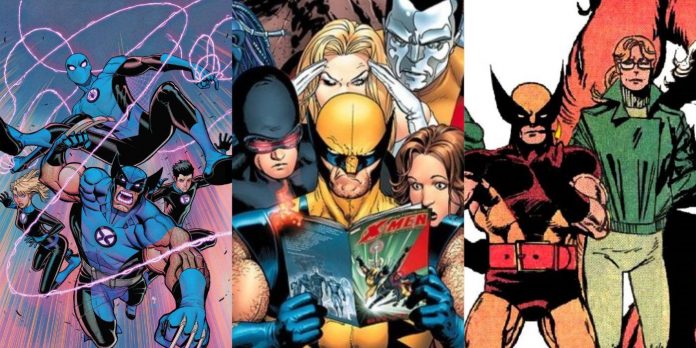 Whether he’s slashing his way across the big screen or splashed across the pages of Marvel Comics, the adamantium-clawed mutant known as Wolverine always seems to find himself a part of a team. Though he has a lone wolf personality, Logan more often than not is among the ranks of some of Marvel’s best squads in the comics.

From his star-making run in the X-Men to his modern day romps as part of the Savage Avengers, Wolverine is usually the linchpin that holds a great team together. Though he has been in tons of teams over the years, only Wolverine’s best squads left an impression on readers and are still remembered today.

Wolverine’s team membership is usually pretty straightforward, but when he became a member of the Swordbearers of Krakoa, his adventure was anything but usual. Assembled by Opal Luna Saturnyne, the Swordbearers were tasked with standing up against the forces of Arrakoa who had aligned themselves with the Horsemen of Apocalypse.

RELATED: The 10 Best X-Men Comic Storylines, According To Ranker

Wolverine’s admission into the team was an interesting one, and he certainly stood out alongside the likes of Storm and Magik. However, the team wasn’t all mystical mutants, and the inclusion of characters like Cable helped to balance out the muscle. Wolverine is usually very dedicated to the teams he joins, and he even went on a long and perilous journey to Hell to retrieve his weapon for the fight.

Some teams are assembled and meant to last a long time, while others come together to achieve a singular goal. During the War of the Realms storyline, Captain America assembled the Jotunheim Strikeforce in order to infiltrate Jotunheim and retrieve Thor who had been left stranded there.

Despite the short-lived nature of the group, the team was still a powerhouse unit that included heroes like Luke Cage on its roster. What made the team so great was that it assembled a wide variety of different heroes, and yet the team worked well together in achieving their goal. The team-up was one of the best parts of the War of the Realms storyline, which is generally considered a great comic for new readers of Thor comics.

Wolverine wasn’t an original member of the group, but he soon joined their ranks and was an overall asset for the squad. Darker in tone than the normal Avengers, the New Avengers featured heroes like Iron Fist and Bucky Barnes, and the group achieved their goals by any means necessary.

Even though the Defenders were a loosely organized team to begin with, the Secret Defenders were formed by Doctor Strange when they were needed and had no set roster. Despite not having an official team structure, Wolverine was often called upon to help out and he never turned the good doctor down.

The Secret Defenders didn’t stick around for too long, but each issue gave readers an exciting chance to see some of their favorite Marvel heroes together in one book. The organization offered fans some of Marvel’s strangest team-ups, and the constantly changing personality dynamics were one of the things that kept the story fresh.

If there was one word to describe Wolverine, savage might be one of the most accurate summations of his character. The Savage Avengers was a unique pairing of some of Marvel’s toughest fighters, and they all lived up to their name. The core of the team was comprised of the duo of Wolverine and Conan the Barbarian who was accidentally transported to the Savage Land from the Hyborian Age.

Matching the clawed former X-Men member in ferocity, Conan’s full-time introduction to the Marvel Universe was handled with perfection. Of all the teams to sport the Avengers name, the Savage Avengers were perhaps the strangest, and their roster truly highlighted their differences. Despite the seeming mismatch, the team functioned well, and often vexed their main enemy, The Hand.

The Fantastic Four are one of the most beloved teams in comic book history, and their legacy is inextricably linked with Marvel Comics forever. However, when the original lineup was captured by the Skrull, a new version of the team quickly formed to fill the void.

The New Fantastic Four assembled some of the most recognizable Marvel heroes including the Hulk, Ghost Rider, and Spider-Man, and the team dynamic was made complete with Wolverine’s prickly personality. While the FF have had many great alternate members in the past, the new version of the group was a veritable all-star team that rivaled even the original squad.

Wolverine is nothing if not a patriot, and his Canadian heritage meant he was destined to end up on the Alpha Flight roster at some point. Alpha Flight was an amalgamation of Canadian mutants who were all employed by the government as protectors of the nation.

Wolverine was one of the earliest recruits to the group, and though he didn’t stick around for too long, he is still one of their best members. Alpha Flight represents the greatest of what Canada has to offer in the mutant department, and Wolverine usually always answered the call whenever he was needed to help out.

The Avengers and the X-Men haven’t always gotten along over the years, and the Unity Division was designed as a way to soothe tensions between the groups. The squad featured various mutants and other assorted heroes who were incorporated into the Avengers fold, and the team ended up being quite formidable.

Wolverine was one of the team’s marquee members, and his inclusion meant that he had been in almost all of Marvel’s top teams at some point over the years. Though the team was lead by characters like Captain America and Rogue, the squad always had an eye towards fairly representing mutants and non-mutants alike.

If the X-Men were the squeaky clean version of mutant heroes, X-Force was the grittier squad who got the job done by any means necessary. Assembling some of the toughest mutants around, X-Force lived up to their name and usually used deadly force to protect mutant kind.

In the wake of rising anti-mutant sentiment, it was necessary to form another team that was primarily focused on mutant affairs. Wolverine has been a longtime leader of the group, and his eye towards violence made him perfectly suited to take the reins. Though they aren’t as famous as the X-Men, X-Force was still just as capable of saving the day.

Headed by the ultra-intelligent Professor Charles Xavier, the X-Men collected mutants from all over the globe and helped them hone their craft in a world that was hostile towards them. The original X-Men team is legendary, and though the roster has changed over the years, the most famous members are still forever linked to the team.

The X-Men were already firmly established when Wolverine joined their ranks, and his gruff attitude often chafed with the rigidity of the X-Men code. Logan has found a revolving door at the X-Men mansion, and has often left the team only to return quite frequently as well. While he may have outgrown his X-Men confines, there is no doubt that Wolverine will always be remembered as a member of the legendary mutant team.