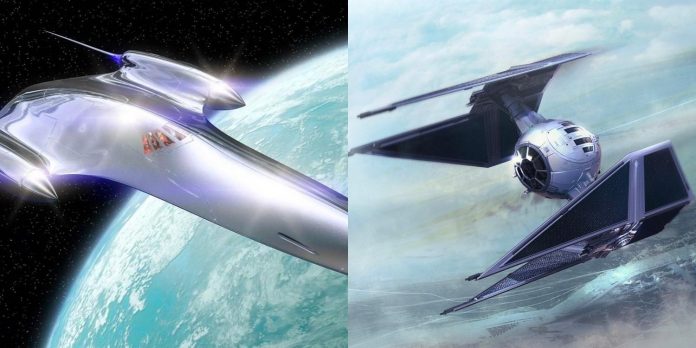 Like so many of the other entries in the Star Wars saga, Obi-Wan Kenobi (2022) features a number of important starships, all of which add to the pleasure that this series already offers established fans. Of course, the ships have long been a part of this franchise’s appeal, as they so often prove key to the numerous battles and conflicts that take place.

Given the numerous types of spacecraft that have appeared during the many years of the franchise, it can be hard to determine just which are the best, but the users of Reddit have discussed and identified which ones they prefer.

There are few ships in the Star Wars universe that are quite as recognizable as the Millennium Falcon, arguably one of the best spaceships in science fiction. It’s easy to see why it would become such a firm part of the lore, given its prominence in both the original trilogy and the three sequels.

As ethifi puts it: “Hard not to get attached to it as it’s such a recurring theme throughout the movies.” What’s more, it also plays a key part of Han Solo’s identity as a character, and it’s hard to imagine him without it.

Many planets play an important role in the happenings of the Galaxy, and Naboo is especially notable for being the birthplace of both Padme and, of course, Palpatine himself. It is also remarkable for its ability to create stunning spacecraft, including the Royal Starship.

It manages to be both quite beautiful and quite technologically advanced at the same time and, as such, is a fitting representation of the general Naboo spirit. As ethifi writes, it is “Just such a sleek and elegant looking ship. I love the fully mirror polished coverings.”

Orson Krennic has a well-deserved place as one of the more sinister villains of Star Wars. It was his plans, after all, that helped to pave the way for the Death Star and all of its terrifying abilities. His ship, nicknamed the Pteradon, is yet another instance of fearsome design in the Star Wars universe.

It has a fearsome geometry, very much in keeping with so many of the other intimidating ships of the Empire. Rtgray0724 identifies it as one of  the series’ “unique ships with personality.”

Boba Fett has gone down in Star Wars history as one of its best characters, a feat all the more remarkable considering his relatively minor role in the original trilogy. Like all of the series’ most recognizable characters, he is also notable for his use of his own ship, identified as the Slave 1.

Windmillninja calls attention to just how groundbreaking his ship was: “Slave 1 was the first sci fi ship to buck tradition and go top to bottom rather than side to side (if that makes sense).” Given Boba’s status as a character, it is fitting that his ship would be so similarly iconoclastic.

There’s no question that Darth Vader is one of the most iconic villains in the history of popular culture, instantly recognizable even by those who don’t know a great deal about Star Wars.

In keeping with his status as Palpatine’s apprentice, he has his own ship, which Windmillninja describes as “just an all around space terror.” With its enormous dimensions and its considerable power, it is a fitting extension of Darth Vader’s will and his belief in his own ability to batter anyone into submission.

Throughout both the original and the sequel trilogies, the Empire (and later, the First Order) were able to be as powerful as they were because of the weapons and ships they commanded. The Super Star Destroyer, used often by the Empire, is an excellent example of how this political organization maintained its power. It was, in many ways, a visualization of the Empire’s ruthless approach to policy.

Tvnr eloquently observes: “The Super Star Destroyer reveal is so incredible every time! Coming out of the darkness of space is so imposing.”

Some ships have come to be so firmly associated with Star Wars that it’s hard to imagine the franchise without them. This is certainly the case with the Interceptor, which manages to be both very swift as a ship and also very frightening to witness. With its vaguely insectoid look, for example, it manages to capture the impersonal approach that the Empire takes to so many of its most frequently used weapons.

And, as tvnr writes, the “Tie Interceptor is so menacing.” The ships, as so often in Star Wars, play a vital role in the emotions of a given scene.

In the sequel trilogy, Kylo Ren establishes himself as one of its best characters, capable of great cruelty and yet also ultimately redeemable. Like all of the most important Star Wars characters, he also has his own ship that bears his personal stamp, a Tie Silencer. It is not only clearly evocative of earlier ships used by Darth Vader but, with its sleek design and firepower, is a perfect encapsulation of Ren’s personality as a leader of the First Order.

Redditor Tvnr concurs, stating: “Kylo Ren’s did have an impressive look to it. I think it fit his character perfectly.”

Though it was later pushed out of the canon and rebranded as Legends, the many stories and novels that were written before Disney’s acquisition of Lucasfilm have continued to exert a powerful pull on the imagination. These stories feature a number of notable ships, including the Sun Crusher, which was able to turn any given star into a supernova, thus granting it a power unmatched by almost any other ship in Star Wars lore.

Linkthealmight states that “ it was a childhood favorite for me.” Clearly, it still exerts a hold on some members of the fandom.

As is so often the case with ships that originated on Naboo, the N1 Starfighter managed to be both quite beautiful and also quite effective. With its slim design, it was quite useful at a number of functions, including both escorting and defense, serving as yet another fitting externalization of the essential characteristics of those who dwelt on this planet.

No-Show-5690 was particularly appreciative of its “its sleek design.” It is also memorable for its bold color, which helped it quickly become one of the most recognizable ships in the Galaxy.

The Witcher 3 Rides And Fights Geralt In His First Steam...