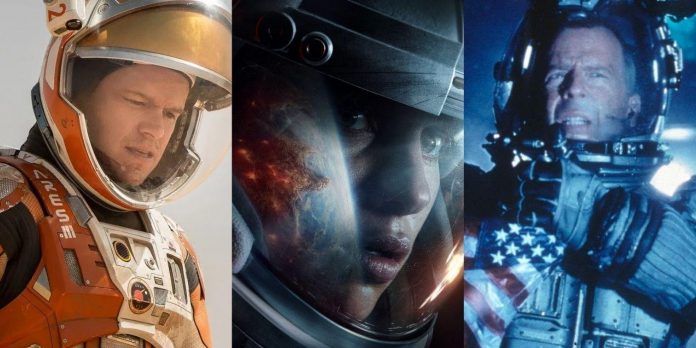 The recently released sci-fi disaster film Rubikon depicts a unique scenario that takes place entirely in space, with a group of astronauts debating whether they should help potential survivors back on a planet that has been engulfed by lethal fog. The catastrophe on earth leaves the characters feeling like they’re the last humans alive and the movie explores how they cope with this and form relationships with each other.

While there’s no other film with that exact premise or story, there are some that have similar plot elements or even characters. These are the perfect choices for viewers who enjoyed the gripping and thought-provoking events in Rubikon.

Known for being a movie with an environmental focus, The Day After Tomorrow depicts the disturbing apocalyptic consequences of a rapid increase in greenhouse gases. It follows the story of the paleoclimatologist Jack Hall who sets out to rescue his son who’s trapped somewhere out in the frozen landscape.

Just like Rubikon, the cataclysmic event in The Day After Tomorrow comes on suddenly and with little warning. Only those in the know are aware of it, which is similar to the war Rubikon comments on the unchecked power of corporations and their leaders.

In the not-so-distant future, the world’s leaders have cooperated to fund and create a sophisticated network of satellites that control the planet’s climate in Geostorm. Something has gone terribly wrong in the system, though, and the technology made to keep humans safe is actively harming the earth in epic proportions.

Much like the main characters in Rubikon, satellite designer Jake Lawson works with a team in space to save as many lives as possible on earth. Geostorm definitely has more of a thriller than a philosophical element to it, which makes it perfect for those looking for an exciting sci-fi disaster film.

Available to stream on Netflix.

How It Ends is a riveting thriller film that portrays Will Younger’s experiences after a mysterious seismic event causes chaos in an area where his pregnant wife is. Together with his father-in-law, they embark on a rescue mission that brings them through dangerous roads full of desperate survivors.

The movie doesn’t reveal exactly what is causing the deadly disaster, as, just as the Rubikon explores the characters’ decision-making process, How It Ends focuses on the protagonist’s relationship with his wife and her grumpy father. Both films highlight how people react to world-shattering events that can test their humanity and resolve.

Available to stream on Netflix.

When astronomy professor Dr. Randall Mindy and doctoral candidate Kate Dibiasky make the startling discovery about a meteor heading straight towards the planet in Don’t Look Up, they try to warn everyone that they only have six months before impact. Randall and Kate become frustrated by both the government officials’ and public’s reaction to their urgent news, though.

With the apocalyptic comedy film originally designed to be a satirical portrayal of the world’s non-reaction to climate change, it’s easy to imagine that the scientific community on earth in Rubikon had similar warnings before the cataclysmic event took place.

On Dr. Ryan Stone’s first ever Shuttle mission with the veteran astronaut Matt Kowalsky in Gravity, a terrible accident leaves her alone and fighting for her life in outer space. With no way of communicating with earth and a rapidly dwindling oxygen supply, she has to act quickly and beat the mounting feeling of panic to make it out alive.

It may not be an apocalyptic movie, but Gravity and Rubikon both show what isolation and desperation in space can look like. The terrifying expanse of darkness and nothingness is nothing like the safety and certainty back home, which the characters want to go back to more than anything.

An unforgettable movie about earth-destroying comet, Deep Impact, is centered on the looming disaster from space and humanity’s attempts at preparing for the collision. A reporter grapples with the responsibility of breaking the terrifying story while resolving her own personal issues, while a group of astronauts struggle with the gargantuan task of stopping the comets.

The heroes sent to detonate nuclear bombs on the comets face a problem that’s not too dissimilar from the conundrum Rubikon’s characters have. They ask themselves the hard questions about what’s worth sacrificing for the continuation of life back on earth.

The classic sci-fi disaster movie, Armageddon, revolves around a world-destroying asteroid and expert driller Harry Stamper’s team’s efforts to stop it. Their mission is to plant a nuclear bomb in the center of the asteroid and detonate it before it makes it to the earth, but things predictably don’t go as planned.

The doomsday scenarios in Armageddon and Rubikon are completely different, but they both highlight how different individuals react to those unbelievable situations. The two films delve into hard-hitting themes like sacrifice and love in the face of an apocalyptic disaster.

After an unexpected storm on Mars, the astronaut Mark Wattney is presumed dead in The Martian. His crew accidentally leaves him behind on the red planet where he has to use his wit to survive and somehow let the people on earth know that he’s alive.

Aside from being set in space, The Martian shares a unique similarity with Rubikon in the way it depicts how complicated and important plants can be. In the 2022 film, algae is used to demonstrate the life-saving potential of flora, while the 2015 movie uses potatoes to show the complex process of sustaining crops in space.

Often cited alongside the best sci-fi films of the 2010s, Melancholia portrays the strained relationship between two sisters, Justine and Claire, which is further complicated by a planet that’s on a collision course with earth. The art film explores the differences in the way they cope with the impending disaster.

As workers and partners leave them, the two main characters are forced to simultaneously confront and support each other during the trying time. Their aloneness is similar to the isolation experienced by the crew from Rubikon, who are thankfully spared from the apocalyptic event in the film.

Set in 2057, Sunshine is an underrated sci-fi gem that depicts a critical last ditch attempt by a group of astronauts who set out on a dangerous mission to revive the dying sun. If they fail, the solar winter that has engulfed the earth will completely eradicate any hope of survival for the human race.

The film holds up incredibly well and is still worth watching today. Its tense moments arising from disagreements among the crew are similar to the fights the astronauts have in Rubikon. The main characters from both films have to make impossible decisions for humanity’s long-term survival, and they don’t always make the right choices.