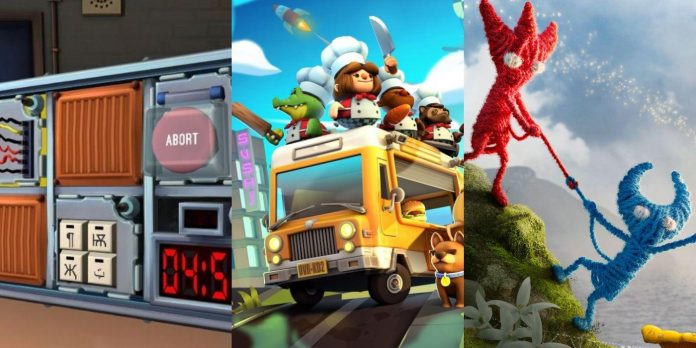 Despite being a handheld device, the Nintendo Switch encourages cooperative and competitive play, especially with multiplayer titles like Monster Hunter: Rise and Nintendo Switch Sports. Because the joy-cons of the device are removable, gamers can play together while only using one device.

Because of its multiplayer features, the Nintendo Switch is a great console that couples should consider getting. What’s more, the device is portable, so they can play it whenever and wherever they want. From the fighting game Super Smash Bros. Ultimate to the stressful Overcooked 2, some titles on the Nintendo Switch cater well to duos.

Lovers In A Dangerous Spacetime

Couples can test their cooperation in the game Lovers In a Dangerous Spacetime. The indie action party game from developer Asteroid Base sees players work together in order to maneuver a spaceship across levels with dangerous enemies. However, only one player is in charge of one aspect of controlling the ship, so gamers need a solid plan before starting the gamers.

With its cute graphics and straightforward gameplay, Lovers in a Dangerous Spacetime is a great co-op game for gamers looking for a casual strategy title.

Stardew Valley is a simulation game where players can live their dreams of moving to the countryside and doing activities that city folk can’t do. Concerned Ape’s bestselling game allows gamers to manage and cultivate a bustling farm, catch some exquisite fish, and help rebuild a town’s community center.

On the Nintendo Switch, up to two gamers can simultaneously play Stardew Valley thanks to the game’s split-screen co-op. Aside from its relaxing slice-of-life aspects, Stardew Valley also has plenty of interesting NPCs with unique backstories.

On the surface, Overcooked 2 might look like a cute cooking game on the Nintendo Switch. Couples beware, though, as it is a very chaotic game where players need to expertly manage a restaurant to prevent customers from walking out.

In the game, couples have to strategize and communicate properly in order to prepare, cook, and serve delicious dishes on time. While it can get players on each other’s nerves, the game is still incredibly fun, and being able to fulfill the demands of hungry diners is a satisfying achievement for those who play Overcooked 2.

Racing titles like the Mario Kart 8 Deluxe are a great way to build healthy competition amongst couples. Released in 2014 for the Wii U and later ported to the Nintendo Switch, Mario Kart 8 Deluxe improves on its predecessors and includes new features such as downloadable content, anti-gravity racing, and ATVs.

There are also new characters that join the Mario Kart franchise in Mario Kart 8 Deluxe. These include Cat Peach, The Legend of Zelda’s Link, Animal Crossing’s Isabelle, and Baby Rosalina. Gamers can also face off in Battle Mode, which are different games and arenas that elevate the game’s racing mechanics.

One of the most popular multiplayer games on the Nintendo Switch is Super Smash Bros. Ultimate. In the game, players choose from a myriad of popular characters from various games, such as Final Fantasy’s Cloud, Pokémon’s Mewtwo, and Metal Gear’s Snake.

In the indie game Death Squared, players need to control two robots and make sure that they don’t get destroyed by obstacles, as well as successfully move around the platforms. Players need to have strong communication skills if they want to quickly go through the puzzles though.

With about 80 stages, the game has a lot of content for gamers to play together. What’s more, its gameplay style is more intuitive compared to other puzzle games, making the whole co-op experience easy and smooth.

For couples that want an absolutely stress-free game, they should try their hand at Pode. In essence, Pode is a cooperative puzzle game with well-designed stages. The gamers control two opposite characters in the game, each with unique abilities that work together in order to clear a level.

The game has been well-received thanks to its relaxing sound design, moving story, and graphics that are easy on the eye. While it may not be a free puzzle game on the Nintendo Switch, Pode is well worth the buy for its serene gameplay.

Co-op meets platforming segments in Unravel Two. Developed by game studio Coldwood, Unravel Two follows two tiny string creatures who connect themselves with each other, allowing them to run, swing, jump, pull, and flip across different environments and platforms.

There are some scenarios where players will need to make a decision and finish the platforming segment as a combined being or work separately in order to clear a platforming level. The game’s customization options also add to its fun and engaging experience, as players can change the appearance of their own Yarny.

Keep Talking And Nobody Explodes

The game Keep Talking And Nobody Explodes has been a hit on platforms with VR capabilities like the Oculus Quest or PlayStation 4. The stressful game is also available on the Nintendo Switch, albeit in a less immersive environment.

In the game, one player has to defuse a procedurally generated bomb while the other player gives instructions on how to do it. However, the other players are not allowed to see the bomb, so they need to be concise and comprehensible so the one in front of the bomb can successfully defuse it.

Luigi’s Mansion 3 is one of the most popular games on the Nintendo Switch library. The game sees Luigi and other characters get invited to a stylish hotel. But little does he know that something sinister resides in the hotel and that he needs to fight ghosts in order to save his friends.

The co-op version of the game sees Luigi and a goo version of him work together to defeat the monster. There’s a ton of content in the game, so it’ll take gamers some time to complete it. What’s more, the campaign mode has some excellently animated and entertaining cutscenes.

Aaron Rodgers believes in the “possibility of reconciliation” with the family...