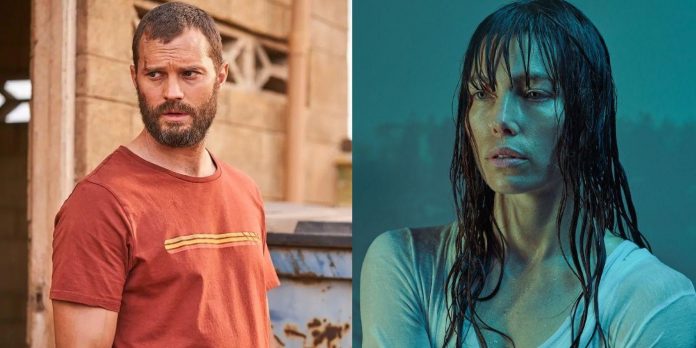 Debuting on July 29, 2022, the new Apple TV+ original series Surface follows the life of Sophie (Gugu Mbatha-Raw), a woman desperately trying to piece her life after a major head injury leaves her with memory loss. As Sophie attempts to understand what happened to her, it appears that she will have a huge battle ahead of her since there are several people out to get her and stop her from remembering what she wasn’t meant to know in the first place.

Many fans would agree that Surface looks to join a solid collection of mysterious TV shows that have the viewers glued to their seats from start to finish. However, if fans of the show are looking for similar shows that focus on a protagonist with amnesia, suspenseful mysteries, or the theme of reclaiming their identity, there are plenty of options to choose from.

One of the earliest and most acclaimed mystery shows built around the amnesia premise includes John Doe, in which Dominic Purcell plays the title character (who is a man that suddenly falls from the sky and lands in the ocean). When he comes to, John realizes he has no recollection of his past whatsoever, yet cryptically harbors a wealth of knowledge about literally every other subject on Earth.

With a vast knowledge of the outside world and no clue as to who he is, Doe sets out to cobble the pieces of his erased memory together while using his intellect to help two police detectives solve a series of crimes. Like Surface, the unreliable narration of the main character’s cloudy mindset is what drives the intriguing and unpredictable nature of the premise.

In a loose gender-bending remake of John Doe, Blindspot stars Jamie Alexander as Jane Doe, an enigmatic woman with amnesia who is found inside a duffle bag in Times Square. Covered head to toe in tattoos, Jane and the FBI slowly realize the inky artwork on her body provides subtle clues about her true identity.

While Blindspot promises more high-octane action than Surface, at their core, both series are about the horrors of the unknown as two strong-willed women doggedly determined to overcome their cryptic past to build a better future for themselves (leaving viewers to wonder if their unreliable narration can be trusted or if what is in their mind has been manipulated by others).

For those looking for a little levity, they should watch The Flight Attendant. Kaley Cuoco stars in her best role as Cassie Bowden, a flight attendant who awakes in the wrong hotel one morning with no recollection of how a dead man ended up in her bed.

As she races to remember what happened and clear her name of murder, Cassie learns more about herself than she cares to, adding an absurdly waggish wrinkle to the Surface premise. Hailed for Cuoco’s magnetic performance, bubbly tonal and visual pizzaz, and the central mystery that is genuinely difficult to decipher, going from underwater in Surface to cloud 9 in The Flight Attendant is the proper way to travel on the tube this summer.

Lauded as one of the best TV shows of 2022 as well as featuring Jamie Dornan’s best overall role and performance, HBO Max’s The Tourist follows The Man, a mysterious wanderer who awakes with amnesia in a hospital in the Australian outback and slowly rounds up clues that he uses to decode his cryptic past (all themes in common with Surface).

Extolled for Dornan’s powerfully commanding central performance, the enthralling unpredictability of the story, shocking fits of unexpected laughter, and for treating memory loss as a real human ailment rather than a simple plot device, The Tourist takes the amnesia mystery-thriller template and has a ball tossing it on its ear.

A heady companion piece worth watching along with Surface includes The Rook, a Starz original miniseries that tracks Myfanwy Thomas (Emma Greenwell), a young woman who awakes one day in a park with total memory loss surrounded by fresh corpses. As she pieces her past as a British secret service agent together, Thomas uncovers a government conspiracy to steal her memories.

While The Rook veers into a more supernatural sci-fi realm than Surface does at times, both shows offer fascinating glimpses into the profound ways someone’s mind can play tricks on them, exploring the ephemeral nature of memories being just as harmful as the romantic and nostalgically pleasing ones.

Despite premiering this past February, Apple TV+’s Severance has already earned 14 Emmy nods and currently ranks #108 on IMDb’s Top 250 TV Shows of All Time. The wildly inventive premise concerns Mark (Adam Scott, in one of his top roles), an office worker who has his memories surgically divided between business at work and pleasure at home, leaving a frustratingly mysterious gray area he and his co-workers attempt to decode.

Like Surface, Severance is a head-swimming psychological thriller that mines what memories mean to a person’s intrinsic identity and how the psychological Mandela Effect can alter perceived truths. Praised for its ambition, ingenuity, and excellent ensemble, Surface fans don’t even need to switch subscriptions to experience Severance.

Season 1 of the acclaimed Amazon Prime Original drama show, Homecoming stars Julia Roberts as Heidi Bergman, a social worker employed by the Homecoming Transitional Support Center (which is a facility aimed at helping war veterans return home peacefully). However, when Heidi can’t remember her time working there after she leaves, she’s left to fill in the gaps of her fractious memory and uncovers a vast conspiracy.

With a mesmeric turn from Roberts, a genuinely intriguing central mystery to keep viewers on edge throughout, and another excellent female-centric, character-driven piece about confronting one’s own long-buried demons, Surface and Homecoming are simpatico psychological thrillers anchored by an amnesiac mystery.

The underrated Polish Netflix series, Open Your Eyes, concerns Julia (Maria Wawreniuk), a young woman sent to an amnesia treatment facility following the grisly death of her parents. As she meets fellow patients who’ve experienced similar trauma, she meets a boy named Adam and begins filling in the blanks of her unknown past while forging a redemptive path.

A surreally dreamy dramatic mystery loaded with unforeseeable story wrinkles, Open Your Eyes also touches on the consequences of death, loss, grief, and how such profound emotions can directly affect the accuracy of a person’s memory.

Sticking with the Netflix international theme, Tabula Rasa is a mind-scrambling 9-part Belgian series that every fan of Surface needs to see ASAP. The vexing psychological thriller traces Mie (series creator Veerle Baetens), a woman who discovers that she has been admitted to a psychiatric hospital and can’t remember why she is there. It is full of wildly unpredictable hurdles that will trip viewers up from beginning to end.

Currently boasting an 8.0 IMDb rating and a 95% Rotten Tomatoes user score, people simply need to give Tabula Rasa a chance to experience how cleverly written and credibly performed the series is, not to mention the salient statements it makes on how much a person’s identity is inherently linked to their oldest and dearest memories, and what it means to lose them all in a blink of an eye.

Season 1 of USA’s original anthology series The Sinner concerns Cora Tannetti (Jessica Biel), a woman with partial memory loss, who is trying to figure out what could have caused her to commit several crimes.

As such, The Sinner is arguably the most germane TV show to watch with Surface in relation to the distortion of memories, and how cognitive dissonance can mislead even those who think they are remembering things clearly. Applauded for Biel’s commanding performance and for keeping viewers off-kilter with its clever, cliche-free plot conventions, Surface and The Sinner both prove that a mind is a terrible thing to waste.

The Boys Season 3 Will Have “A Lot Of Madness”; Details...

How Each upcoming MCU Movie & Show Sets The Avengers 5,...