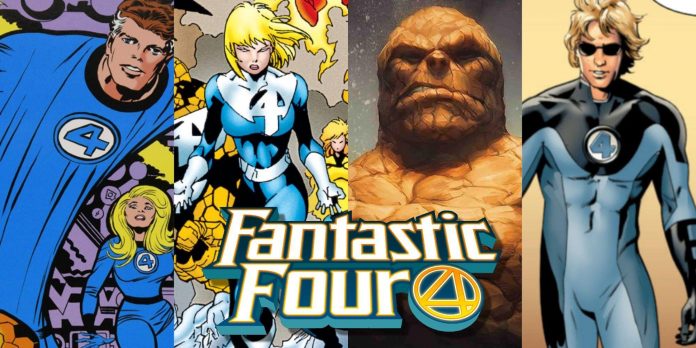 Since their debut in 1961, the Fantastic Four have donned many costumes as a team; after all, the squad is always adapted to fit the times, and that includes their blue uniforms. With the Fantastic Four set to join the MCU after John Krasinski’s debut as Reed Richards, the new film characters have multiple styles to use as inspiration.

For over 60 years, Marvel has sent their first family on a multitude of adventures written and illustrated by many talented creators. Sometimes they wear more traditional superhero suits, while other times they are updated to fit a more sci-fi design depending on the run.

Created by Jack Kirby, the first design for the Fantastic Four would be the blueprint that all future designs would take some inspiration from. They are blue one-piece body suits adorned with a big number four on the chest.

It’s minimalistic in a way: using little details but has just enough to be effective as well as iconic. It’s one of many genius designs by Jack Kirby that he would present throughout a long career.

The blue would almost always stick around, but another color that the Fantastic Four are known for having in their looks is white. In the 1980s, the Fantastic Four would be redesigned with blue and white uniforms, sporting white collars, gloves, and boots to help them stand out on the pages.

They debuted in Fantastic Four #256 and since then, the blue and white suits became a longtime staple and have been homaged with other suits in comics and animated shows. The design even worked to create one of She-Hulk’s iconic costumes when she was one of many powerful Fantastic Four members.

Back In Blue Uniforms

After wearing red suits for a brief period, the Fantastic Four returned to their iconic blue. Their symbol was given an all-new square-shaped redesign, Reed sported a beard later on which has become one of the character’s signature features, and all the characters’ looks were given modern-day updates. The same suits were used during Secret Wars but given a slight change to the insignias.

Secret Wars marked one of the last times fans would see the Fantastic Four as a team until they would be brought back together in 2018. So these suits being a mix of old and new was a nice send-off for the team at the time before and during Secret Wars.

Blue will always be the Fantastic Four’s signature color but sometimes, Marvel experimented with other hues. With The Fall Of The Fantastic Four storyline, the team wore red and black uniforms that were meant to signify a fresh start for the team after Johnny Storm returned.

The bold four symbols mixed with the red made for a particularly eye-popping redesign by Leonard Kirk, but this style would only last for 12 issues. It was probably for the better because while it is a well-designed look, Marvel already has a plethora of red-themed characters.

These took the classic blue and white design and gave it a more futuristic overhaul. They looked like space explorers from an old-school sci-fi film with new details added to the uniforms. The symbols were moved to the side just over their hearts, a common but effective trope with a lot of superhero designs.

The short-lived Ultimate universe tended to really overhaul superhero designs to be as bombastic as possible. With Ultimate Fantastic Four, on the other hand, the heroes were actually more streamlined.

They wore simple blue suits that were more back to basics but still updated just enough to be unique for this new and iconic alternate version of the Fantastic Four. The Ultimate Fantastic Four were changed to be young adults barely out of high school, and the new designs fit that.

Since the 90s weren’t so great for the Fantastic Four, the team got a fresh start in 1998 which introduced the Heroes Reborn suits. After sporting suits similar to the Onslaught designs, the Fantastic Four would go back to a more classic style.

RELATED: The Top Writers For The Fantastic Four, Ranked

The Fantastic Four reverted back to suits that reflected their first appearance. It just goes to show that no matter what, even the best redesigns can’t hold a candle to the characters’ iconic originals. This would continue to the Chris Claremont era and beyond.

After Johnny Storm AKA The Human Torch died, the Fantastic Four reformed and rebranded as the Future Foundation. This led to temporary new members such as Spider-Man joining the team, as well as new all-white and black suits that may not have lasted long but that left an impact.

The Future Foundation version of Spider-Man became one of the web-slinger’s most iconic suits. The monochromatic redesign with hexagonal insignia gave the Future Foundation a more fittingly futuristic look. Later on, a nearly identical Fantastic Four design would come along with the Matt Fraction run of these characters.

Return Of The Fantastic Four

In 2018, comic book writer Dan Slott took on Fantastic Four and brought the team back together for a new post-Secret Wars era. Not only is it a great Fantastic Four comic for newcomers, but it gave Marvel’s first family a new and refreshing design.

The Fantastic Four’s signature blue was now only used for accents while the main bodysuit was now jet black. Similar to the red suits, these modern suits were to give the heroes a new look for a new era and these designs have stuck around ever since.

The Jonathan Hickman era is often considered one of, if not the best run of the Fantastic Four. Hickman’s writing was mostly responsible for that, but Steve Epting designed new suits that kept a very classic look for the characters while updating them for a modern time.

Unlike many other suits, the Epting design would last multiple years until Hickman’s era came to an end in 2012. The short sleeves, blue with dark blue accents, and the inclusion of suits for Valeria and Franklin Richards led to the Hickman era suits becoming iconic suits in the team’s history.