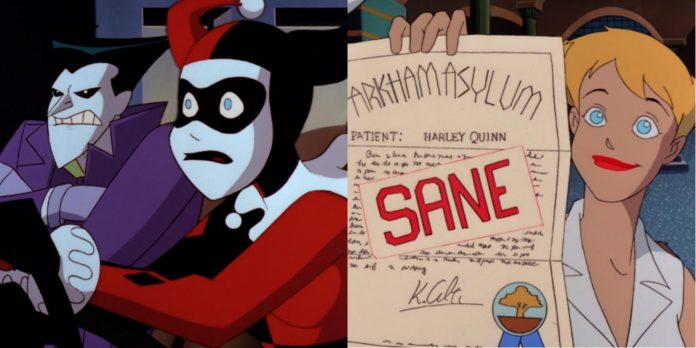 With the news that a new season of Harley Quinn is coming in July, DC fans everywhere are talking about the popular character. Harley Quinn actually debuted and appeared in numerous episodes of Batman: The Animated Series and The New Batman Adventures. The DCAU changed many things for the DC multiverse forever, especially by introducing Harley.

She was an exclusive character for Batman: The Animated Series but her popularity grew with each episode she appeared in, so she became a canon character in the comics. This is because of certain episodes where she stole the show, even if the episode wasn’t specifically about her.

Harley does not have a large role in this episode but she does have fun banter with the Joker. Her presence also showcases an important aspect of her character. Her trapping and capturing Harvey Bullock shows that she’s not just some dim-witted lackey for the Joker.

RELATED: 10 DC Characters Who Are Smarter Than They Look

Harley Quinn is famous for everyone underestimating her skills as a fighter and her intelligence as she’s one of many DC characters that are smarter than they appear. Other than that though, “The Laughing Fish” is definitely more of a Joker story.

One of the funniest episodes of Batman: The Animated Series, “Joker’s Millions” is all about Joker struggling financially until he becomes a millionaire. It’s one of Mark Hamill’s funniest performances as the Joker but the episode does have a strong Harley subplot.

Thanks to his riches, Joker decides to replace Harley with a copycat and this sets her off. Harley steals the episode with several hilarious scenes throughout and it even ends with her getting sweet revenge.

This is arguably Harley’s most important episode because this was her first appearance. She shows up throughout as Joker’s right-hand woman and was never intended to be this iconic character.

However, fans and the creators loved the character so much that she became a recurring character. The installment itself is one of the more iconic Joker episodes; Harley Quinn’s debut being one of many reasons why.

For once, the Joker has competition with Jack Ryder who, thanks to the Joker, is transformed into a zany villain known as The Creeper. He develops a crush on Harley and pursues her, living up to his new codename, and he proves to be a problem for Joker and Batman.

RELATED: Fan-Casting A Live-Action Version Of The Harley Quinn Series

This is one of many episodes where it’s easy to feel bad for Harley. The poor woman is trapped between two creepy villains that view her as a prize and a superhero who wants to put her away. She can never catch a break.

The second holiday special of the series, “Holiday Knights” is an anthology of stories. The first one tells the story of Harley Quinn and Ivy using a mind-controlled Bruce Wayne to go on a shopping spree.

Despite it being wrong in many ways, it’s undeniably endearing to see Harley and Ivy have fun for the holidays. The DC animated universe has many Holiday specials across the different shows and “Holiday Knights” continued the streak of making them entertaining.

It’s like the old saying: opposites attract. Harley Quinn and Poison Ivy have very little in common but when they come together as partners, it’s a recipe for disaster and entertainment. This episode is what started the now-iconic partnership between the two and would be the seed that blossomed into the romance between Harley and Ivy.

Even in the episode, there are a lot of romantic undertones; this adds to their natural chemistry that makes them so enjoyable to watch. Even when they are committing horrible crimes, Harley and Ivy are Gotham’s equivalent to Thelma & Louise and it’s hard to hate them.

Harley and Ivy ate at it again but this time, they are allied with Livewire, another character created for the DCAU. The romantic undertones return big time with Girls Night Out since Harley shows a lot of jealousy when Ivy and Livewire get along. The unrequited love triangle leads to an enjoyable episode that shows more of Harley’s humanity and her love for Ivy.

RELATED: 10 Biggest Things The DCAU Changed From The Comics

One of Harley’s famous traits is that when she’s away from the Joker, she does her best to reform. That started with “Harley’s Holiday,” where she is released from Arkham Asylum as a free woman. So now that she can roam the streets as she wants, it leads to a lot of humorous instances with her and her hyenas.

As much as “Harley’s Holiday” can be viewed as a fun concept, it also shows more of the tragedy of the character. While she gladly wants to live a normal life, the people around her view her only as the villainous jester and that stigma ends up pushing her back to a life she really doesn’t want.

Harley Quinn acting as an anti-hero also started in Batman: The Animated Series with “Harlequinade.” This episode focuses on Batman and Harley Quinn working together to stop the Joker from destroying Gotham.

Not only is the partnership between Batman and Harley genuinely adorable and humorous but Harley Quinn shows that she would be an effective superhero. As a result, all of the comics, movies, and future shows that depict Harley as a hero can all be traced back to “Harlequinade.”

The final episode of the entire series also happens to be one of the greatest. Harley began as this silly henchwoman and she evolved to the point that the series ended by giving her an origin story. At this point, the story of Harley Quinn is famous; she was a doctor at Arkham Asylum who was manipulated and turned into a villain by the Joker.

The abusive relationship with Joker has always been present but “Mad Love” shows just how horrible he is to her. No matter what she does, Joker always ends up hurting her emotionally and physically, even going as far as throwing her out of a window. The saddest part is that Harley Quinn always falls back in love with him, making her one of DC’s most tragic villains.

Elden Ring: How Long Is The Main Story?