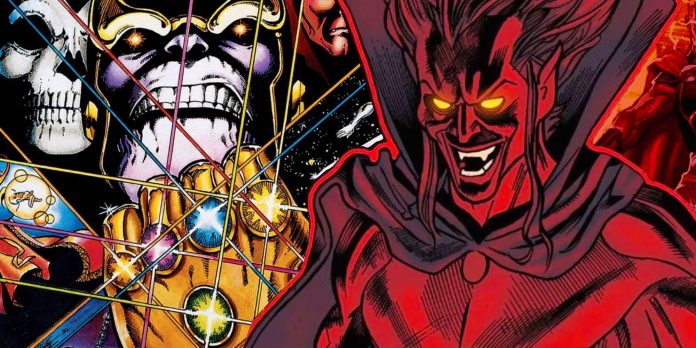 While Marvel’s Avengers comics have been building on a major multi-sided war on the horizon for the past few years with Mephisto at the center, Thanos and the iconic Infinity Gauntlet storyline have become its secret prologue. Given the discovery that Mephisto has been working on his dark endgame for years, a new level of context has formed related to his time serving the Mad Titan and what his true intentions might have been. However, the connection between the Infinity Gauntlet and the coming battle should be more explicit.

Ever since Jason Aaron started work on The Avengers, which began in 2018, the demon lord Mephisto has been the man behind the scenes of several events such as The Honshu Era, Heroes Rebirth, and more, such as when he assembled the Multiverse Masters of Evil to kill teams. Avengers by worlds (leaving the main 616 Avengers for last). Thus, everything leads to a major confrontation between Mephisto and the Avengers, which will also involve the Council of Reds, the legion of Mephistos, united from different universes. Apparently, Mephisto has always been preparing for this imminent war, going so far as to secretly shape past events as he sees fit (for example, sowing distrust between the Hulk and the earliest Avengers cast to limit their power).

So this presents his role as the Infinity Gauntlet with Thanos in a whole new light. Published in 1991 by Jim Starlin, George Perez and Ron Lim, Mephisto was the first to serve the Mad Titan as one of his students, helping him in his mission to subdue the universe with the Infinity Stones collected by Thanos. While some have speculated that Mephisto was helping Thanos secure his position in the new universal order, as well as biding his time before stealing the gauntlet for himself just to gain more power, neither option seems likely now that his multiverse endgame has been revealed. Thus, it is much more likely that Mephisto’s motives came from a desire to sabotage Thanos’ plans in order not to go astray (while pretending to be a loyal servant).

While this is by far the most likely reason why Mephisto will be working for Thanos during the Infinity Gauntlet, it would be nice if Marvel Comics took the time to make this supposed connection a more concrete link to current issues. In the context of Mephisto’s long-running scam in the Marvel universe, the demon lord probably worked for Thanos to make sure his own larger-scale plan was still possible. This is a pretty cool connection that can be easily missed.

Logically, in the multiverse, Mephisto’s war with the Avengers has everything you need to become more of an official continuation of the “Infinity War”. All he needs right now is confirmation from current writer Jason Aaron and Marvel Comics. Thanos, who controls all things and reality, would certainly work against Mephisto and his plans, but this epic connection must be explicitly stated in future releases of the Avengers so that it is not lost.

Father of the Bride Review: A Remake with a Little Innovation...