We detail all the changes that patch 10.16 brings to TeamFight Tactics (TFT) and that affect systems, attributes and various champions.

Like every few weeks, the Riot Games team offers Master Tactics players a series of variations on certain aspects of the title to give a breath of fresh air to its goal. In the release notes they claim to be happy with the current state of the game’s balance, so they have only modified a few items, champions, and attributes to perform better, while weakening the compositions most prone to unbalance the game (Sniper and Astronaut). We also remind you that you can check the changes of the objects in the entry for them. Below, we detail the changes introduced in this TFT patch. 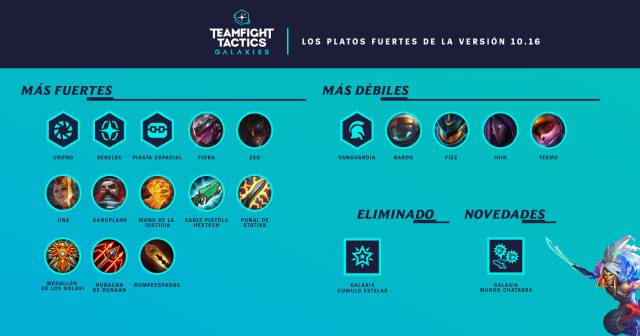 As usual, this patch offers us the possibility of acquiring three new mini-legends: Melisma, Alatierna and Pingu from the spiritual flourish event. In this way they expand the range of aesthetic elements that we can achieve both by paying with Riot Points and through the missions of the event in question.

As for systems and as it has become customary for a few patches, a new galaxy is introduced to the detriment of another, which is removed from the game. This time we will stop being able to play in Star Cluster in exchange for the possibility that the Junk World board appears. In it, when we sell a champion with complete items, its components will break, giving us the possibility to use their essential items in a different way in another champion. In addition, we can see the recipes of the different objects by right-clicking on any component, highlighting the final objects that we can create with what we have available on the board at that time.

This time the figures of various objects have been varied in order that getting certain of them is not so difficult for the player.

Riot’s team wanted to improve these attributes so that obtaining them is more rewarding for the player, since it is very difficult to achieve them.

Jordyn Woods radiant: these selfies that make everyone agree!

The Future of the ‘Hunger Games’ Adapted Film from the New...

Taehyung has the best remedy for insomnia