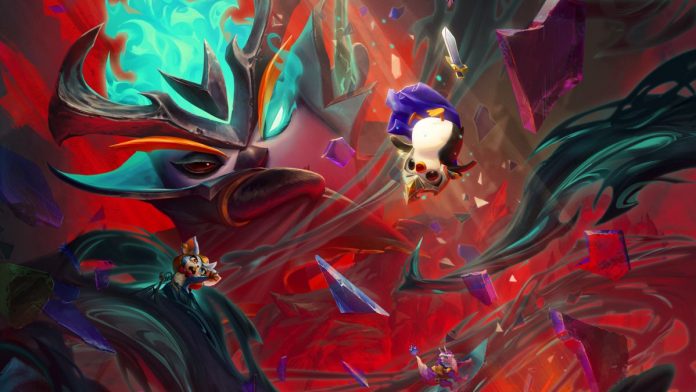 TFT Last Judgment: We tell you all the details of TFT Set 5, the new stage of Teamfight Tactics called Final Judgment and that will arrive on the official server this AprilThe Riot Games team has turned the Master Tactics board upside down again to celebrate the arrival of the fifth set of the game: classes that return, origins that are released, new mechanics, objects that are reinvented … We have been able to try everything, and in In this article we are going to tell you what the bases of the strategy game will be during the following months. The Black Mist has come to TFT through a mysterious portal and ravages the battlefield. Players will have to choose a side, chaos or order, and make a balanced team whose synergies will lead to victory. Prepare yourselves, because we enter fully into the Final Judgment.

In addition to new characters, classes and synergies, what stands out the most in this fifth set are, without a doubt, the shadow objects. At first glance they may seem normal. In fact, the basic components have the same characteristics when they are shaded as when they are normal. For example, a giant’s belt gives our character the same life whether it is shadow or classic. However, if with this shadow belt we create a more advanced object, such as a Warmog armor, we will obtain a shadow item. We can also get these objects from the second carousel, as well as in the new temporary store called armory. This shop is similar to the one for heroes, but disappears after you’ve selected an item. In this way, players will be able to obtain between two and four of these items in each game, depending on the decisions they make.

But why do we want a shadow object? They are much stronger than their common counterparts, but they also carry a risk that will force us to adapt our strategy or cross our fingers in each round. For example, if we get a Force of Darkness (the corrupted equivalent of the Force of Nature), we can add two extra characters to the board, but we will also take more damage with each defeat. This approach refreshes the focus of each game, forcing us to take risks and be creative and flexible in each situation.

Within the Laboratory category, new game modes will be proposed to players within the TFT concept. In principle, they are temporary formats that will change after a while, unless the game mode becomes very popular. On this occasion, the laboratory presented to us is the Hipertienda, although we could not test it first hand.

In Hipertienda the games are designed to last around 15 minutes, since players start with ten life points and lose one of these for each defeat at the beginning and 2 points for defeat during the last rounds. Another big change is that the re-roll has no gold cost, so we can constantly update the store to configure a specific team quickly. The Riot team has also said that changes have been made to neutral minions, loot, level up, and carousel within this mode. There will be a range of qualifying games independent of the TFT ranked.

Of course, the Doomsday season also brings changes to champions, classes, and origins. Some of the new classes are Hellish, Forgotten, Herald of Chaos, Battleship, Reborn, Knight, and Warrior of Order. Each of these classes brings new synergies and strategies, each one more fun. For example, one of our favorites has been hellish: these little yordles revive the first time they are killed and return to the board (yes, without the objects they might have equipped). This results in a chaotic board full of creatures that are as endearing as they are hateful.

There are also more champions that have three attributes, so more synergies are generated. This makes the mental flexibility of the player essential during the last bars of each game, but does not negatively affect the first rounds.