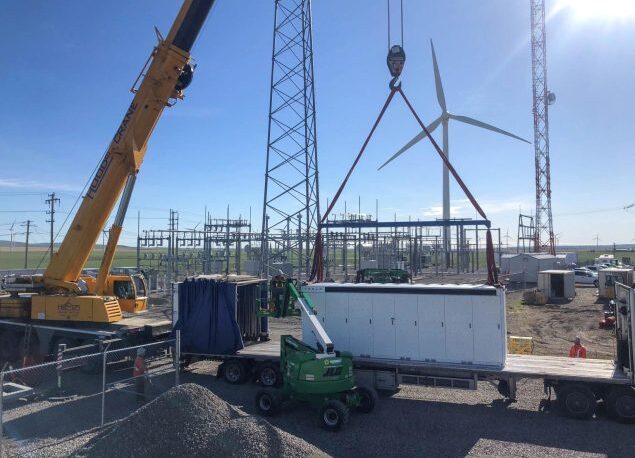 Megapack, developed by Tesla as an energy storage unit, will be used in another project. Megapacks, mainly lithium-ion battery storage unit, were installed in the wind farm for a Canadian power company WindCharger project.

Although Tesla usually comes to the fore with the electric vehicles it produces, it also continues its breakthroughs in the energy storage sector. Working on clean and renewable energy sources, the company announced the Megapack energy system it developed last year through the Tesla Energy division.

TransAlta, an electricity company in Alberta, Canada, will use Tesla’s battery storage system in some of its renewable power generation facilities. TransAlta has been researching storage capacity in wind farms for the past few years. As a result of the studies, the project named “WindCharger” emerged and TransAlta’s Summerview Wind Power Plant was chosen as the first region where Megapack energy storage systems will be used.

TransAlta shared photos of the new Tesla battery packs for the WindCharger project last week. When the project is completed, the wind farm will have a total storage capacity of 20 MWh and a power capacity of 10 MW. This is a fairly large amount to test the plant’s battery storage system.

TransAlta aims to make Tesla Megapacks running by the end of the month. Although the product is quite new, it’s not actually the first Tesla Megapack used in Canada. Earlier this year, Saint John Energy was announced to have received Megapack as well, but the project contained only one Megapack. The new WindCharger project includes 9 Megapacks to help TransAlta use wind power more efficiently.

Megapack, the company’s latest energy storage product after Powerpack and Powerwall, was considered as a larger option targeting electrical service projects. The system saves a great deal by helping to support the electricity network of the region where it is installed. In addition, Megapack takes 40% less space at field level than existing systems on the market and requires 10 times less parts.

Tesla’s energy storage product, Megapack, significantly benefits Tesla’s revenues as well as the energy consumption of cities. The company is increasing its presence in the energy sector as well as in the automobile sector.

Honor Play 20 Pro introduced! Here are the features and price