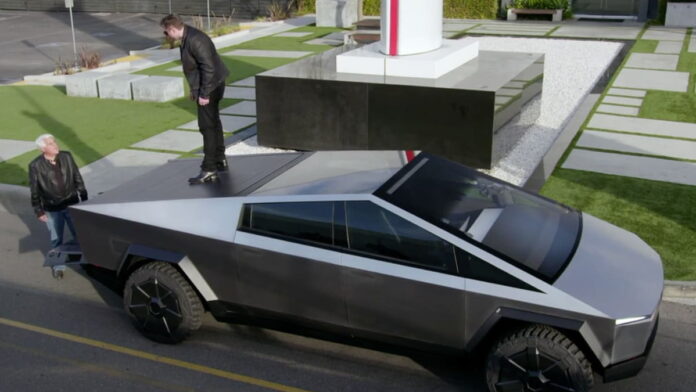 The well-known comedian Jay Leno and the owner of Tesla, Elon Musk, this time came together for Tesla’s electric pick-up model Cybertruck. Cybertruck has also been featured in the program named Jay Leno’s Garage, which is about the comedy’s passion for cars.

Cybertruck, the new pick-up model introduced by world-renowned electric vehicle manufacturer Tesla in November of last year, appeared in an entertainment program this time. Elon Musk, who participated in the program named Jay Leno’s Garage, where the comedy, known for the legendary Tonight Show, brought his passion for cars to the screen, took Cybertruck with him. A trailer was also released for the section where new information about the vehicle was given.

It is possible to say that although the vehicle, which is given the date of 2021 for its production, is expected to be affected by the global coronavirus epidemic and therefore delay, there is a considerable number of spectators who are curious about the program of Leno. Let’s add here that Elon Musk is reminded as a recurring information that the version of the car will be designed a bit smaller considering the home garages.

Glasses will be bulletproof:
One thing that is heard from Leno’s mouth is that the windows of the new electric pickup are designed to be bulletproof. It is understood from this that the glasses that were criticized and disliked after the latest prototype were subject to new studies in this period. In addition, it is learned that the new car will be built with stainless steel and will have an armored design.

For those who do not know that Jay Leno is a tight car collector, all this news can be surprising. However, it is said that it is very difficult to find another collection that will compete with the car collection that it has. Having over 150 cars and motorcycles, the comedian is ambitious in this regard and his program is followed closely by car lovers. We know that Cybertruck is also a car that Elon Musk trusts, although the information that has emerged for now is limited to these, we will see how the content is when the new episode is published.