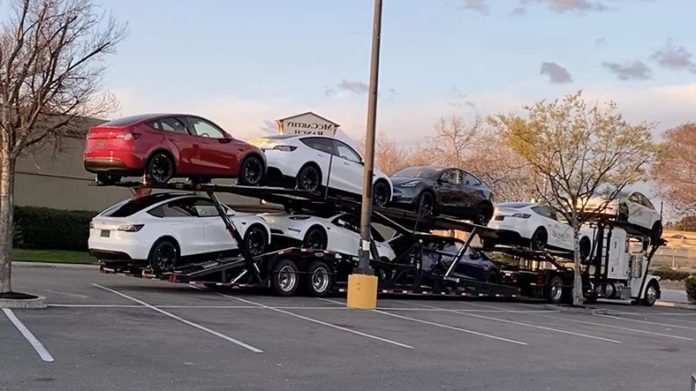 Tesla announced that the vehicles will start to be delivered in the middle of March by sending mail to the people who ordered Model Y recently. Now the images of the Model Ys, which were completed in Tesla’s factory, were transported by trucks.

Delivery of Model Y, the electric SUV Tesla introduced last year, will start in the coming days. The resulting new images show that the shipment of Model Ys has begun.

Tesla, by sending an e-mail to some people who ordered Model Y, said the delivery would take place in the second week of March. It was revealed that Model Y was stocked in the parking lot of Tesla’s factory in California last Friday. In the newly published photos, it is seen that Model Ys are loaded on trucks. In other words, Tesla started the shipments of Model Ys on the basis of dealers.

Tesla introduced Model Y in March of last year. Model Y, based on Model 3, attracted attention with its 300-mile (approximately 480 km) range and large internal volume compared to Model 3. However, Tesla turned the delivery process of Model Y into a snake story with his own hands.

When Model Y was introduced, it was announced that the delivery of the vehicles would be at the beginning of the summer season of 2020. However, later on, the date of delivery was changed to February 2020 with the statement made by Tesla. The last picture that emerged was a little different. People who ordered Model Y were mailed last week, and it was reported that the delivery would take place in mid-March.

Now the first Model Ys are expected to be delivered on March 15. The vehicles, which are seen from the factory, are thought to be used in shops and test drives. However, Model Y loading continues on the delivery vehicles in the parking lot of the factory.