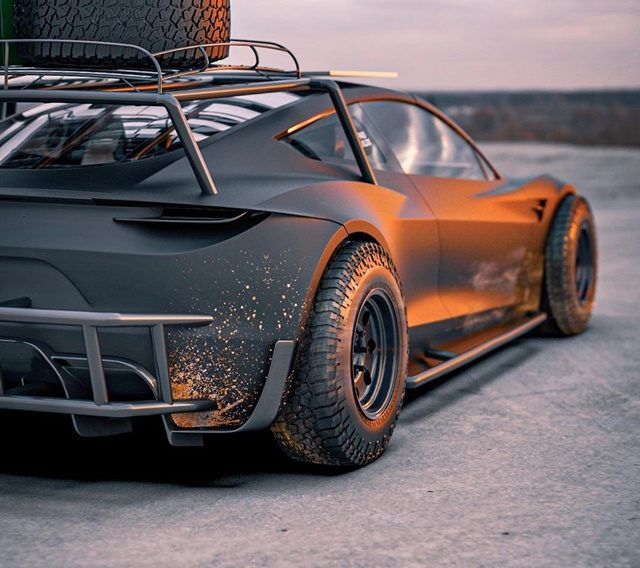 U.S. concept design artist BradBuilds has released a Tesla Roadster design that looks like it has jumped out of the Mad Max movie. The designed Tesla Roadster seems to be getting ready after the apocalypse with solar panels, off-road tires and protection equipment.

US concept artist BradBuilds has released a concept design called Tesla Roadster Safari, which will be a great help in times of disaster. The design, based on Tesla Roadster, has become a real-life reflection of the vehicles in Mad Max.

Tesla Roadster, which has a matte black color; Developed with solar panels, large off-road tires and grille protections. Rendered images of the car, placed in desert images, are covered with realistic dirt marks.

The batteries of the vehicle can be kept constantly filled with the solar panels placed on the hood, ceiling and the edge of the steel trunk on the roof of Tesla Roadster Safari in the images designed based on the Porsche 911 Safari design.

Next to the solar panels, steel guards in the form of a grid are placed on the front and rear of the vehicle. In addition to the steel guards, the vehicle’s tires are also replaced by large off-road tires. With this design, Tesla Roadster has become a vehicle that will confront tough conditions.

Tesla’s tools have been attracting the attention of concept design artists for a long time. The designs of Tesla, which carries the design lines of modern times, gain completely different views in the hands of concept artists.

Apple Announces How To Clean iPhones From Corona Virus