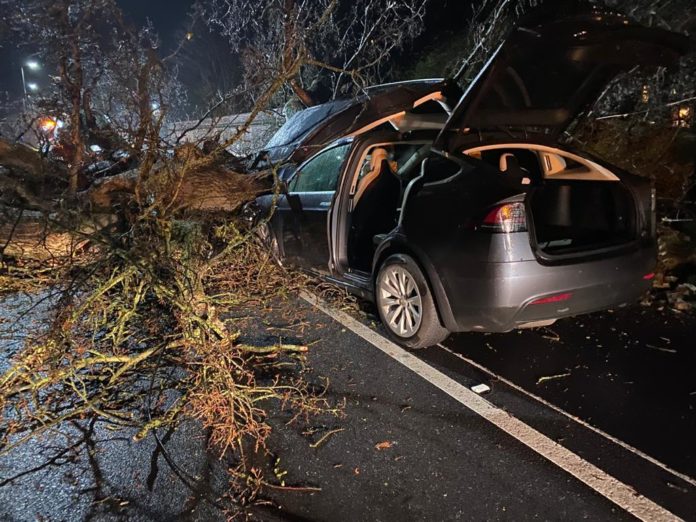 A family living in the UK survived a vehicle overturned by a storm while traveling on Tesla Model X vehicles. The family, who survived thanks to the Tesla vehicle’s automatic braking system, states that if they are only a second late they can die.

Tesla vehicles, which have been on the agenda recently with accident news, miraculously saved the life of a family. Tesla Model X, which noticed a tree that was fallen due to Hurricane Dennis that affected Northern Europe, saved the family from crushing by activating the automatic braking system.

Laurence Sanderson, one of the victims of the incident on February 15, was on the move with a 86,000 pound (about 677,000 TL) Tesla Model X vehicle in the forested area at the Dorset County of England. While Sanderson was traveling around with his vehicle, the storm that dominated the region caused a 400-year-old oak tree to fall to the ground. At that moment, the man who passed by miraculously survived the accident thanks to the automatic braking of Tesla Model X, and the tree smashed the hood of the vehicle.

Live the accident, Sanderson says they will be crushed if they’re a second later:
Sanderson, who has his wife and three children as well as himself in the vehicle, said that if Tesla Model X had no automatic brakes, he and his family would be ‘toast’. Interestingly, another Tesla vehicle was coming from the opposite direction at the time of the incident. The automatic braking systems in this vehicle came into play just in time, saving the family of four, and no one was harmed by the accident.

Speaking after the accident, Sanderson stated that his wife was a bit shaken, but they survived the accident cheaply. The man said that he saw a tree shaking while he was on the A31 road and that the vehicle’s automatic brakes were activated, he added that they would be crushed if only one second later.

After this bad event, the local police and fire crews arrived at the scene. The A31 road from Guildford in Surrey, England to Bere Regis in Dorset was closed to traffic for a while after the accident.

Kylie Jenner nostalgic for her blonde hair? She says more!

Agathe Auproux dreams of the reopening of cinemas!

The range of $ 6-7 thousand in Bitcoin poses great risk...

Coronavirus: older diabetics most at risk

Caroline Flack has died at the age of 40, her family...