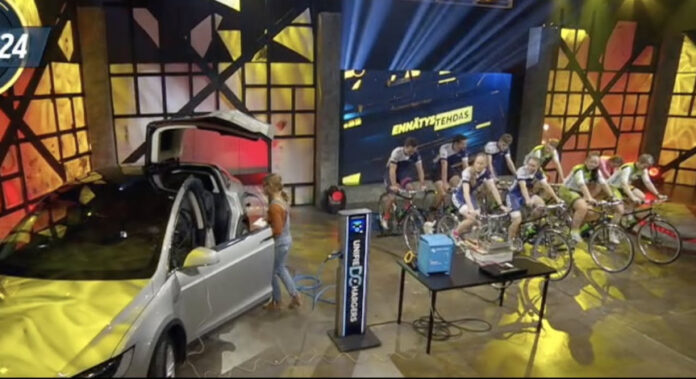 Tesla’s vehicle Model X, one of the leading electric vehicle manufacturers, was charged with human power. A group of cyclists managed to set a new record by charging the vehicle with 9 bicycles on the live broadcast.

Electrically powered cars are considered one of today’s high-end technologies. Electric cars, which reduce environmental pollution, are at the focus of many car manufacturers. Tesla is also considered one of the leading companies in the electric car industry. The company has many studies on this subject.

One of the best things about electric vehicles is that there are many options to power the vehicle. Electric vehicles are much more prominent in this regard, especially considering that oil-powered vehicles have only one option. Some users can even meet their cars’ power needs by installing solar panels on their homes.

The Tesla Model X was charged with human power:

A group of cyclists also fun to discuss that electric vehicles have a variety of power sources. These cyclists managed to fully charge the Tesla Model X electric vehicle with the power they created by cycling. Cyclists charging a vehicle with their own power brought together technology and automobile enthusiasts on the common denominator and managed to make a lot of noise.

The name behind this success of cyclists is Finnish inventor Janne Käpylehto. Käpylehto highlighted human power, another power that can run electric vehicles. In this context, the inventor built a system of 9 stationary bicycles. The scientist introduced this system to millions of people from a television program.

Cyclists managed to charge the vehicle in a short time and signed a new record. Cyclists, who managed to produce 1 kW of power with a range of up to 2 kilometers with a 20-minute pedal movement, hold the record in this field.

Those moments when Tesla was charged by bicycle: