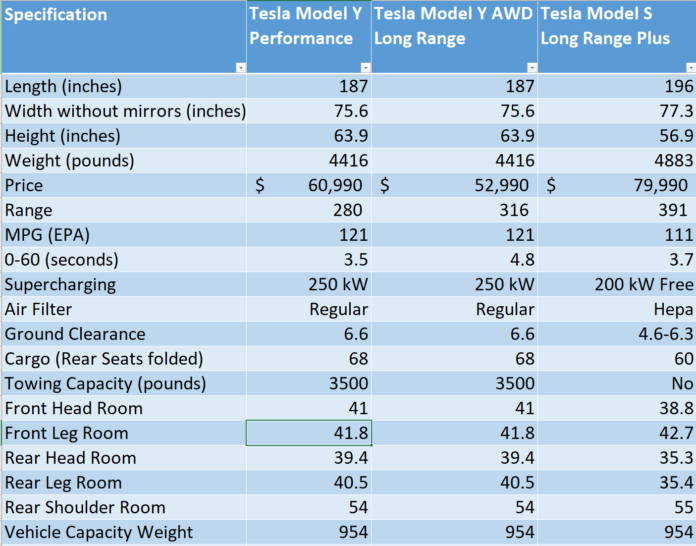 What will be the result when comparing Tesla’s revolutionary Model S and the newly launched SUV of electric cars? While looking for the answer to this question, very interesting information emerged.

Tesla, who is today the CEO of Elon Musk, has led the rise of electric cars by partially destroying the tradition of the internal combustion engine that has been going on for decades. The company has gained everyone’s appreciation with the cars it has released to date, the equipment it sells and the knowledge it clearly shares.

The company, which managed to break records in many ways, presented a new feature in each of its vehicles. Although comparisons are made between the company’s new models these days, what would be the result if we compare a car that is partly old and one of today’s popular Tesla models? The answer to this came up in the comparison by CleanTechnica.

According to the information in the table, Tesla Model S, released in 2012, is heavier than Tesla Model Y, probably because it is a luxury and sporty model. However, when the load capacity of both vehicles was compared, it turned out that Tesla Model S and Tesla Model Y could carry an equal load. Another strange thing was that the Tesla Model Y had more volume.

In addition, the Tesla Model S has a better range than both Model Y versions. However, given the Supercharging capacities of the cars, it is seen that all three models will provide close performance. However, the free Supercharging application in Model S, of course, makes this model a much better choice in the long run.

In the light of the data in the table, we can conclude that Tesla Model S is a much better choice especially because of the Supercharger advantage. However, if you prefer a model that is wide and allows more people to be present, instead of a sporty model, the Tesla Model Y becomes a much better choice. Therefore, we can say that the choice actually remains with the user and that both models are very good in their segment.