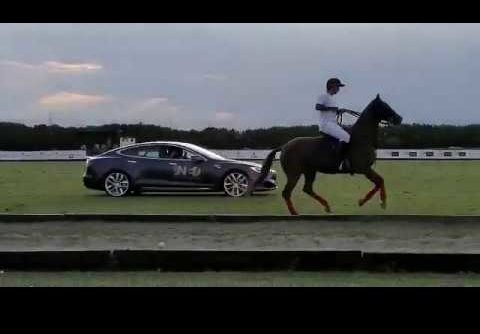 You may have seen many drag races so far, but you will watch this for the first time. Tesla Model S and a horse faced the grass track. Who do you think was the winner of the competition?

The Tesla Model S is almost unrivaled in drag racing as an electric car. This time, however, this powerful car set out to race with the horse, one of the most loyal friends of people. Although it seemed like a fairly unfair encounter, the race was held on the horse’s ground, with the rules of the horse.

If we come to the figures; The Tesla Model S features a powerful engine that can produce 588 horsepower and 1,247 Nm of torque. We do not know the torque of the horse, but we can say that it has a horsepower. So, 1 horsepower is against 588. Although the horse seems difficult to win, do you think slippery grass can take advantage of the track?

The race was held in the form of round-trip to make things more difficult. When the start is given and the race begins, the Tesla Model S makes a quick take off, but it seems that the horse is not behind him. It was not easy for Tesla to turn at that speed, although the horse was left behind with a slight margin.

The horse managed to win the race by accelerating galloping after turning. Yes! The horse buried Tesla on the grass using the advantage of being a host. Horsepower does not mean everything in some conditions.

Suspect of “exit scam” in the stock market that locks all...