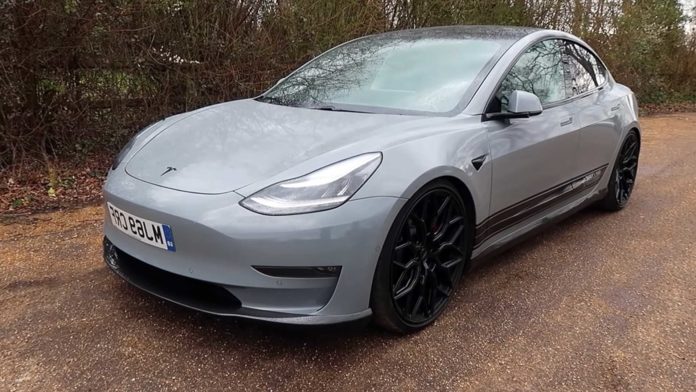 Electric cars do not emit sound while driving, as they do not have an internal combustion engine and exhaust outlet. Of course, we also know that there are some exceptions such as Porsche Taycan. A Tesla Model 3, which has been modified and sounds loud, gives the driver a completely different experience with a fake engine sound.

Almost all electric vehicles, especially Tesla, do not make little or no noise while driving. But some people who are accustomed to noisy motors, this situation is a bit disturbing. Of course, this ‘silence’ is sometimes the subject of controversy for pedestrians and cyclists.

The fact that electric vehicles make no noise, especially at low speeds, poses a significant safety risk for pedestrians and cyclists. As a matter of fact, as of July 1, 2019, the European Union made it mandatory for electric vehicles to have a system called ‘Acoustic Vehicle Warning System (AVAS)’ as they proceed at low speeds.

A company called Milltek Sport, which produces high performance exhausts, has developed an “active sound system” for the Performance version of Tesla Model 3. The system in question turns the vehicle, which is normally a milk-poured cat, into a lion.

The developed active sound system uses Tesla Model 3’s rear speakers to get the noise of any engine you want. The modified vehicle, which is the guest of the YouTube channel Archie Hamilton Racing, can imitate the sounds of 10 different sports cars, including Lamborghini.

Drivers can switch between different audio profiles using the screen on the console of Model 3. In the video in question, we see that the car owner can easily adjust various exhaust sounds through the Milltek mobile app. In addition to the active sound system, the Tesla Model 3, modified with 21-inch wheels, offers a very stylish and sporty appearance. The total cost of the modification in the vehicle is approximately £ 10,000.

Flagship attack from HTC! Here are the claims