Home Tech A Tesla Driver Survived The Accident With Its Fast Maneuver As Autopilot... 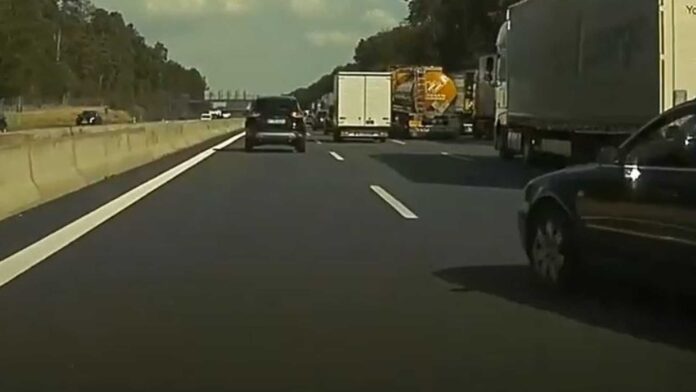 Tesla, which we can count as the pioneer of electric cars, has succeeded to prove itself in safety with what we have seen so far. Advanced systems in each model of the company can react momentarily, even if the driver does not activate automatic control.

We have seen the images that Tesla survived by accident so far, but Tesla’s advanced systems do not play a role in the image we will see today. The video we watch reveals the reaction ability of the driver. Let’s take a closer look at that shocking video.

Meanwhile, the talented driver of Tesla Model 3 makes a difficult and sudden maneuver so as not to crash into the car trying to cross the far left lane. The driver gets away with the centimeters from hitting the concrete barriers on the left and the car from the right.

Thanks to the skilled driver, neither the faulty car nor the Tesla Model 3 are involved in any accident. Throughout this process, the Autopilot mode of Tesla Model 3 was turned off, and the accident prevention systems in Tesla Model 3 did not come into action at the time of the accident. These images remind us once again how careful we should be in traffic.

Of course, although any precaution of Tesla Model 3 does not take effect at the time of this accident, this does not change the fact of how safe Tesla’s cars are. We don’t just say that; In many evaluations made to date, Tesla has been found to be much safer than other cars.

Apple Became The New Leader Of The Smartphone Market!

Company That Routes SMS Had Systems Hacked For 5 Years