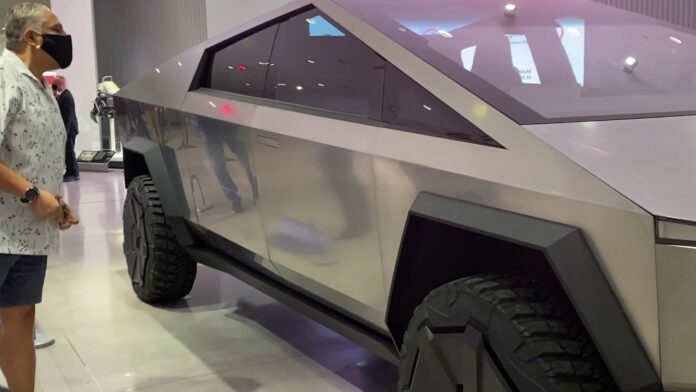 Petersen Automotive Museum, one of the most important automotive museums in America, became the new house of Tesla Cybertruck for six days. The vehicle attracted great attention from visitors.

Petersen Automobile Museum, located in Los Angeles, is a very important center. The presence of a car in this museum is shown to be a very important and prestigious situation for car manufacturers. Cars are temporarily given or donated to the museum.

Tesla Cybertruck, Tesla’s new car, has recently taken its place in the museum. The vehicle, which was in the facility for only 6 days, also attracted the attention of its visitors. The electric pick-up was also recently featured on the company’s site.

Tesla Cybertruck in the museum

The moments of Cybertruck’s download to the museum last night were recorded by Chad Hodge. Thus, Tesla’s new pickup vehicle took its place among the vehicles of the company in the museum. One of them was the Model S.

The pick up vehicle can be seen within a few meters of the museum. It is also possible to take photos and videos of this new vehicle developed by Tesla engineers. On the plate of the vehicle is the expression CYBRTRK.

Elon Musk recently stated that this vehicle will only be shared with a metallic coating, while it is possible to coat the vehicle in different ways. The vehicle, which was previously only visible to a lucky minority, did not go to the streets of Los Angeles.

Cybertruck had a controversy

Although the design of Cybertruck was quite popular, both the likes and dislikes had been very much. Elon Musk and Chief Designer Franz von Holzhausen explained the fine points in the vehicle’s design.

Cybertruck has two different versions with Dual and Tri-Motor configurations. These vehicles will be mass produced at the company’s plants in the USA in 2021. It is not yet known where the new facilities will be built.

Tesla Cybertruck will probably not come to our country, but very few will come. Nevertheless, Tesla Cybertruck can be found at an important point in the development of electric cars.