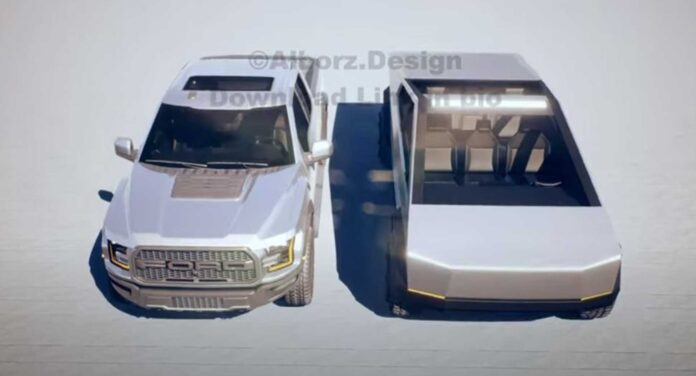 Cybertruck, the first electric pick-up model that attracts attention with the futuristic appearance of Tesla owned by Elon Musk, has been compared to the Ford F-150 since its introduction. A YouTube posted video allows us to compare two vehicles in detail in size.

In a news article we reported today, we shared the video comparing the designs of two electric sports car models Tesla Roadster with Porsche Taycan. Alborz Heydaryan, the designer behind the work, put Tesla Cybertruck and Ford F-150 Raptor in the center of the video.

Tesla Cybertruck, introduced in November of last year, made an impression with its extraordinary design rather than its hardware features. The electric pick-up model, which seems to have skyrocketed from science fiction movies, has an ultra-hard stainless steel exterior. Requiring only 2.9 seconds to reach 100 kilometers per hour, Cybertruck offers a maximum driving range of 800 kilometers on a single charge.

Cybertruck, the first pick-up model of Tesla, the electric car manufacturer owned by Elon Musk, has been compared to Ford’s powerful pick-up F-150 since its appearance. As a matter of fact, Musk shows Ford F-150 as the biggest rival of Cybertruck. Tesla CEO, who emphasized the high price of F-150 at every opportunity and stated that their pick-up models were more attractive, even organized a rope pull race that confronted the two vehicles.

Comparing Tesla Cybertruck and Ford F-150 Raptor in design, the video shows the height difference between the vehicles in a much more prominent way. Set side by side with the Ford F-150 Raptor, Cybertruck looks larger than its competitor in certain respects (especially from the rear).

The fact that Cybertruck would not fit most of the old garages due to its size brought some criticisms. Although Musk initially said that the pick-up could make the design somewhat smaller, he soon gave up on this idea. If we go back to the video; indeed, the back of Cybertruck, which is quite long and wide, looks abnormally large. Looking at both pick-ups from the front, they look very close in size.