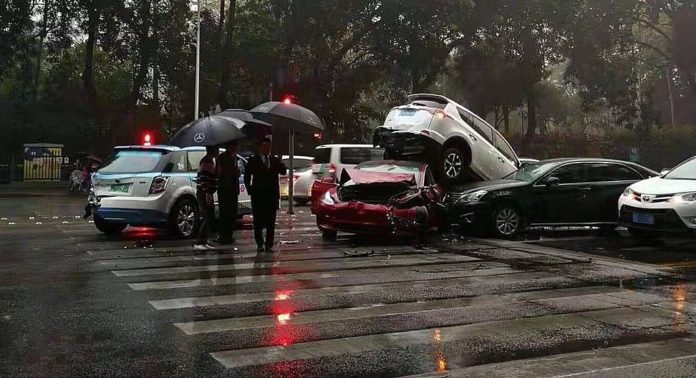 Tesla, makes promises to its customers in terms of ‘speed’ and ‘durability’ in the cars it produces. In particular, the company’s assertiveness in the ‘security’ is justified, an accident in China was revealed. Tesla Model 3 in the accident involving many cars, although a car on top of the robustness of the bending proved once again.

Tesla, the leading company in the electric car market, offers many innovative features to its users. Recently, the company introduced the pick-up vehicle called Cybertruck, which seemed to come from the future, and could not praise the robustness of the material used in the vehicle. There has been a development that reveals that the giant automobile manufacturer attaches great importance to the robustness parameter of other vehicles.

A very interesting detail was noted in the accident involving many vehicles in Guangdong, China. Tesla Model 3, one of the vehicles involved in the accident, gave an image that challenges the accidents with its robustness. So much so that even a model on top of the car’s top panel could not bend.

Here is the terrible accident that showed Tesla’s strength:
As it is known, automobiles undergo numerous tests before the market is released and possible accident situations are observed in real life. The safety of the cars released to the market by private organizations such as Euro NCAP is passed to the end user. The Tesla Model 3, which passed the highest safety rating of 5 stars from the Euro NCAP test, deserves this assessment as you can see in the image above.

Tesla known for his shares about ‘Tesla__Mania’ Twitter’s published images of at least 3 vehicles involved in the accident is seen. Tesla is also optimized for security. During the launch of the roof can withstand up to 9 tons of weight of the vehicle described in this claim is true that this accident is understood.

In addition to the photos taken at the accident site, a video has also been published. You can also watch the video below to see how dreadful the results were, while being cheap.

Microsoft Discontinued All Xbox One Models In 2020