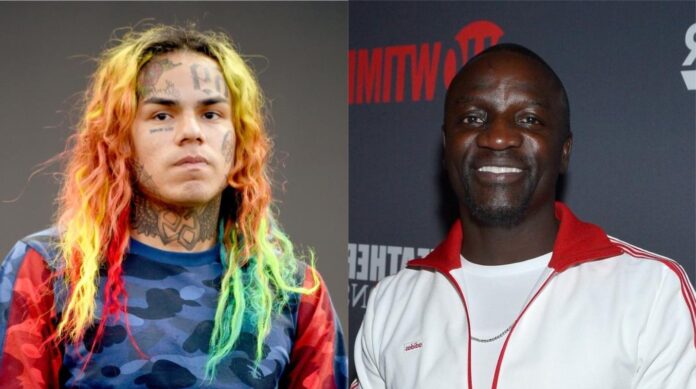 Since 6ix9ine came home from prison, legendary artist Akon has been fighting for him. Akon defended why 6ix9ine ended up teasing his gang mates and at one point, Akon seemed interested in doing a successful battle with Tekashi.

Now, the two go even further with their new friendship, as Akon has been hanging out at 6ix9ine’s house where the rainbow-haired rapper has his own makeshift studio.

In the clip below, Tekashi and Akon are entering a new track in which 6ix9ine talks about being imprisoned. Akon can be seen shaking his head and finally we hear his hook on the classic song “Locked Up”. In the 6ix9ine post, he refers to the song as “Locked Up Part 2” and is currently in album mode.

6ix9ine urged fans to comment on the IG post, saying that if it receives 100,000 comments, it will release the song. Tekashi has been teasing another song for the past few weeks and was originally due out on June 5, but was delayed until June 12.

With this latest collaboration in mind, perhaps there really is some steam throughout this 6ix9ine comeback tour. Here we leave you Akon’s original video and song “Locked Up” duet with Styles P:

Akon criticized on social networks
The alleged collaboration has caused a stir on social media, with Akon becoming a trending topic on Twitter.

Many people are upset that the Senegalese-American artist decided to bond with Tekashi, who has been branded a snitch for cooperating with the federal government to help defeat the Nine Trey Gangsta Bloods gang. They let their anger be known.