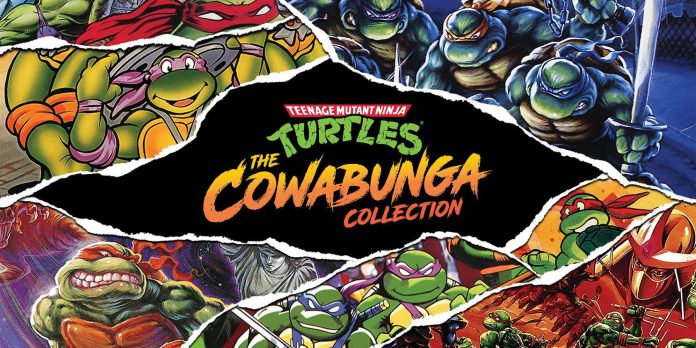 Transferring many classic games of the late 80s and early 90s to modern consoles, Teenage Mutant Ninja Turtles: The Cowabunga Collection contains a huge amount of game history in one bundle. However, while retaining the classic gaming experience in this collection, some games show their age without sufficient improvements to bring them in line with modern releases.

The jewel of the Cowabunga Collection is the original TMNT arcade games, as well as a port for the SNES of the second of these two games, Turtles in Time. These particular pieces were incredible back then, and the same is true now, with improvements like increasing enemy density for faster movement speed.

Each entry in the Cowabunga collection includes an upgrade menu that allows players to make changes to the game. In the case of two arcade games, these improvements are incredibly extensive: “God Mode”, which makes players almost invincible, “Nightmare Mode”, which fills the screen with enemies, and “Turbo Mode”, which increases the speed at which ninja turtles move. Any of these improvements can completely change the game, especially the “Nightmare Mode” and the absolute chaos that it brings to any playthrough.

In addition to new improvements, the most popular games from the Cowabunga Collection are also among the most influential games of all time. While the individual enjoyment of these games in 2022 will likely depend on personal experience and nostalgia, TMNT: The Arcade Game and Turtles in Time are already side-scrolling beat ’em up icons. So, when it comes to how impressive the collection itself is, it can be hard to beat a lineup that has so many genre-defining games for decades.

To the same extent that many of the games in the Cowabunga collection are iconic, however, some of the weaker inclusions in the kit can break the situation. This is most noticeable in games that look like they have been added to the list of available games, which is compounded by the fact that very few improvements have been made to them. Considering that this collection came from the “Nintendo hard” era with harsh resets and clumsy controls, there is still room for port quality improvement.

The most notable controversial point in the Cowabunga Collection list are the three parts of TMNT: Tournament Fighters that appear. While having one of these titles makes sense for a classic collection, especially for the SNES or Sega Genesis versions, a version of the game from the original Nintendo Entertainment System is not needed. With two much better games to choose from for both online and offline gameplay, it’s strange that the worst of these three would be included. At the same time, the differences between the versions for SNES and Genesis are large enough to justify the inclusion of both.

The same criticism exists for two of the three games for the Game Boy: TMNT: Fall of the Foot Clan and TMNT: Back from the Sewers. Both games are incredibly short, they resemble an attempt to port arcade games of the 90s to mobile devices. Apart from the fact that Back from the Sewers is a great example of old-school “hard” punishment of Nintendo, there is nothing inherently negative about these games. However, their inclusion seems to have more to do with filling out the list and including the first two games before the much better Radical Rescue, which could honestly stand on its own as the only TMNT submission on the Game Boy.

Of course, even if there are a few games that don’t add perfection, they can’t reduce the quality of the collection too much by themselves. Also, the list of games is only half the equation for such a set. What puts development in the spotlight of Cowabunga Collection is the emulation software being demonstrated. Although the emulator built into the collection is not as extensive as some of the software available on a PC, it includes a decent amount of quality-of-life improvements that are not usually found on a console.

Following in the footsteps of emulators similar to emulators developed for Nintendo Switch Online virtual consoles, the Cowabunga collection offers the ability to instantly save at any time, as well as rewind a few seconds back. This can make a big difference in solving problems that players may have due to complexity.