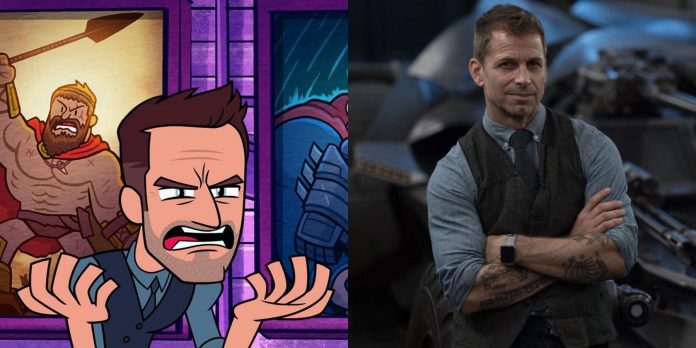 Young Titans, go ahead! Director Peter Michael tells how they managed to get Justice League director Zack Snyder to play a cameo role as an animated version of himself.

During the presentation of Cartoon Network: Winner Takes at Comic-Con in San Diego, it was revealed that Snyder will voice himself in Teen Titans Go! Episode “365!” This episode appeared in the 365th episode of the DC show since its premiere on Cartoon Network in 2013.

Recently, Comic Book Resources took an exclusive interview with Mikhail, in which the director explained how the upcoming cameo appeared. According to CBR, Mikhail said: “We contacted him and offered him this idea. He liked her, and he really was a fan of her.” He continued by saying, “It was surprisingly very easy. It was, and he was great! It was an incredible experience, and we are honored that he became part of the world of Teen Titans Go!, of course.” Snyder is not the only DC director who will play themselves in the upcoming animated project. Suicide Squad director James Gunn will also voice himself in the upcoming third season of the much more adult-oriented animated series about Harley Quinn on HBO Max.

Snyder, of course, is the director of some of the biggest superhero projects for DC and Warner Bros. in recent years. This includes 2013’s Man of Steel, as well as its sequel, 2016’s Batman v Superman: Dawn of Justice. Snyder’s next project was supposed to be “Justice League” in 2017, but he was forced to withdraw from the project after a family tragedy. Warner Bros hired director Joss Whedon to complete the film, which was heavily modified from Snyder’s original vision. This sparked a fan-driven #ReleaseTheSnyderCut campaign on social media, during which fans asked Warner Bros. release a version of Snyder’s film. Two years later, Warner Bros. Announced that a four-hour version called “Zack Snyder’s Justice League” will appear on HBO Max in 2021.

While Snyder’s cameo is probably welcomed by many fans, the director’s name has recently become a subject of controversy. Rolling Stone recently reported on a study conducted by WarnerMedia that found that 13 percent of the accounts participating in #ReleaseTheSnyderCut were actually fake bots. The report also contained rather harsh accusations against Snyder himself, claiming that the director threatened to destroy the producers of “Justice League” Jeff Jones and John Berg on social networks if their names were not removed from the film.

So far, Snyder’s only response to the report has been a cryptic Justice League post on the social networking site Vero, in which he used the quote: “If I step, follow me; if I step back, kill me; if I die, avenge me.” Although this quote dates back to the time of the French Revolution, it is known to have been appropriated by the Italian fascist dictator Benito Mussolini.

Young Titans, go ahead! available for viewing on Cartoon Network.

See how Alexandra Daddario sweetly started her honeymoon by saving a...