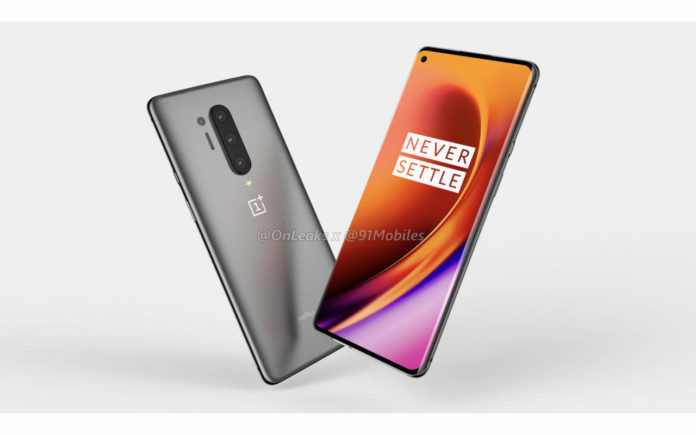 OnePlus’s new flagship smartphones OnePlus 8 and OnePlus 8 Pro’s technical specifications have leaked. The phones, which have the most up-to-date and powerful hardware, seem to be overly ambitious in terms of performance.

OnePlus’s new smartphones OnePlus 8 and OnePlus 8 Pro are expected to be introduced next month. Although the company is quiet about the OnePlus 8 series for now, the technical features of the new generation phones have emerged.

Twitter user Ishan Agarwal, known for his consistent leaks, revealed that both phones will come with 5G support, will come with 8/12 GB RAM, 128/256 GB UFS 3.0 storage, and will be powered by the Snapdragon 865 processor. Both phones are expected to have a 16 MP front camera, but the similarities end here.

OnePlus 8 Pro features:
OnePlus 8 Pro, the most powerful member of the OnePlus 8 series, is expected to arrive with a 6.78-inch 120 Hz Super AMOLED display. In the quad camera setup on the back, two 48 MP sensors are accompanied by other 8 MP and 5MP sensors. The phone will also have the first 30W wireless charging support and IP68 certification for OnePlus.

The One Plus 8 Pro also has a 4.510 mAh battery. The smartphone also features 30W wireless charging support, as well as wired 30W Warp Charge and 3W wireless reverse charging.

OnePlus 8 features:
The OnePlus 8 will come with some more cropped features, though not behind its older brother. The 6.55-inch Super AMOLED display on the phone has FHD + resolution and 90 Hz refresh rate. The triple camera on the back combines 48 MP and 16 MP sensors with a 2 MP depth sensor.

The OnePlus 8 has a powerful battery of 4,300 mAh. Even if the phone doesn’t support wireless charging, it supports 30W wired Warp Charge. Also, the OnePlus 8 doesn’t have any water protection certification. The OnePlus 8 and OnePlus 8 Pro will be the biggest leap the company has ever made, with powerful hardware features. The OnePlus 8 series is expected to be introduced in April.