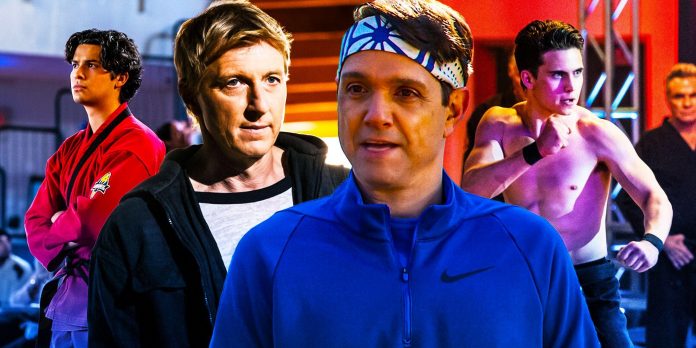 Cobra Kai has laid the groundwork for multiple, unlikely team-ups in season 5. The highly anticipated return of the Netflix series will launch a new chapter in the lives of Johnny, Daniel, Miguel, and all the others. This time around, their main rival will be Terry Silver, as Kreese appears to have been removed from the board for the time being.

Unfortunately for the main characters, the fight to take down Cobra Kai in season 4 didn’t go as planned. Regardless of all the efforts they went through to win their bet with Kreese, they failed to accomplish their ultimate goal. Determined to beat Cobra Kai and win the tournament, several of the show’s key players put aside their differences and formed alliances that wouldn’t have worked in Cobra Kai season 3. Daniel took Miguel under his wing, Johnny developed an influence on Sam, Dimitri and Robby mended their friendship, and Daniel found common ground with Johnny. The problem, though, is that there were team-ups on the villain side as well. Kreese reuniting with Terry Silver turned out to be a winning combination for the Cobra Kai dojo.

Related: Why Kenny Could Leave The Cobra Kai Dojo For Good In Season 5

While some of the relationships formed in Cobra Kai season 4 could continue when the show returns, how the story ended indicates that new character pairings and alliances are on the horizon. Some may be entirely unexpected, whereas others have been directly set up. Here’s every new team-up teased for Cobra Kai season 5.

Ever since the first season, several obstacles have stood in the way of Johnny and Robby having a healthy, father-son relationship. In addition to the existing issues between them that predate the series, there’s also the matter of Miguel Diaz. Robby’s jealousy of his bond with Johnny has been a problem for the two ever since he happened to catch Johnny giving Robby his karate uniform in a season 1 episode. A positive turning point finally arrived when Robby lost in the finals against Hawk. Their long-awaited reconciliation promised a better Johnny-Robby dynamic in season 5. A glimpse into what that would be was provided by the teaser trailer, which shows the two on a road trip to Mexico.

For the first time, Johnny and Robby will be on the same side. However, that doesn’t necessarily mean their goals will be completely aligned. As the trailer reveals, Johnny has apparently taken Robby on a trip without informing him that the plan is to bring back Miguel, the very person Robby has had a grudge against since the beginning. So while the two will be teaming up at the start of the season, their newfound bond may not survive Johnny’s deception.

Arguably the most talked-about team-up going into Cobra Kai season 5 is the one involving Daniel and Chozen. Cobra Kai paid off season 3’s shocking Chozen twist by bringing the character to the Valley, presumably as a main character for Cobra Kai season 5. Having seen firsthand that Chozen isn’t the person he used to be, Daniel is now prepared to work alongside the Karate Kid Part II villain in his mission to destroy Cobra Kai’s hold over the Valley. Daniel has teamed up with a former rival before, but an alliance with Chozen is poised to offer something different.

With his years of diligent training, Chozen brings a lot to the table and is widely regarded to be the biggest threat to Terry Silver in the show. After all, he appears to be the only fighter that’s anywhere close to Silver’s level. And given that he’s sure to have ideas that contrast with Daniel, there’s a strong possibility that he can appeal to potential students in a way that Daniel can’t. Tory, for instance, may not see a mentor in Daniel, but Chozen’s more aggressive approach could be what Miyagi-do needs to bring her into the fold.

Cobra Kai season 5’s Mexico tease sets up not one, but two new character pairings. It’s true that the teaser trailer has emphasized Miguel and Robby’s conflict with one another and the fight that’ll play out between them when they get back, but the direction of their story indicates that a team-up – whether it’s by choice or not – is bound to happen. The fighting shown in the footage confirms that the three won’t be getting out of Mexico without a fight, which is why it’s all the more likely that Miguel and Robby will have to fight side-by-side, even if it’s only briefly. That being said, it’s possible that whatever team-up they experience in Mexico could eventually lead to an understanding and perhaps even a moment where they finally become allies against Cobra Kai. But, as noted above, it looks like they’ll have at least one more fight before the two characters can reach that point.

Mike Barnes isn’t a confirmed season 5 character, but Sean Kanan’s Karate Kid Part III villain was indeed teased in the Cobra Kai season 4 finale. When Kreese was arrested on the false assault charge, Silver claimed he would call in a “friend or two” to help run the dojo. This was interpreted as a reference to Mike Barnes, who was the professional fighter Silver hired to advance his revenge plot against Daniel and Mr. Miyagi in the third movie. Based on Silver’s comment, there’s a good chance Barnes will arrive early in Cobra Kai season 5 to join forces with his old employer. As skilled as he was, it would make perfect sense for Silver to seek him out. After all, Mike Barnes proved in The Karate Kid Part III that in spite of losing, he was still a better fighter than Daniel. That could help motivate Silver to pay for his services for a second time.

Not only did Cobra Kai set the stage for a Mike Barnes appearance, but it also made his inclusion seem necessary for the next chapter. In the span of one episode, the show’s villain story seemingly lost three major characters in Kreese, Robby, and Tory. Kreese has been officially ousted from Cobra Kai, Robby is on good terms with Johnny, and it feels like it’s only a matter before Tory leaves (now that she knows Silver cheated to win the tournament). While Cobra Kai’s expansion may keep its heavy losses from slowing down Silver’s momentum, the show will still be in need of new characters for Silver to interact with as his story continues. That could be where Mike Barnes could come into play, as he could become Silver’s chief ally in Cobra Kai season 5 and his answer to Daniel’s team-up with Chozen.