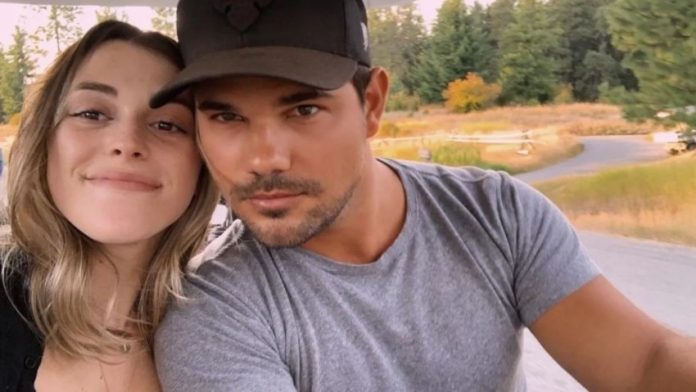 Taylor Lautner, who rose to fame thanks to the character known as ‘Wolf’ in the ‘Twilight’ saga, unveils the first photographs of the day he gave the engagement ring to his beloved

After seeing his defined abs in some of the scenes of the renowned Twilight film saga ( Twilight ), American actor Taylor Lautner has decided that those abs will be cared for by a single woman to whom he has declared his love and proposed marriage.

After being the boyfriend of singers and celebrities like Taylor Swift, Lily Collins, Selena Gomez and Billie Lourd, now the 29-year-old actor, who played Lobo or Jacob Black in Twilight , has chosen to take his relationship with a beautiful girl to the next level nurse named Taylor Dome.

Through his Instagram profile, the actor shared the first two photographs of the great moment when he decided to kneel in front of his girlfriend Taylor Dome and ask her to marry him with a beautiful ring. In the snapshots you can see a space decorated with red roses and petals on the floor as well as numerous candles. In a romantic moment, it was spiced up by candlelight, while in the background an illuminated sign with Taylor’s last name, Lautner, appears.

The actor appears kneeling while his now fiancée watches him excited and incredulous. Tay, as the nurse and instagrammer with whom the actor has had a healthy and beautiful relationship since 2018 is also known, covers part of his face as a sign of not believing what is happening in front of his eyes. In the second snapshot, she crouches down and joins her lover to hold his face and look at each other.

It was on Thursday, November 11, when Tay’s hand request was carried out, according to the date released by Taylor himself, who also shared a brief message about this great moment.

“And so, all my wishes came true,” for her part, the happy bride also shared a message on her Instagram wall along with one of the two photographs that her fiancé posted. “Absolutely my best friend. I can’t wait to spend forever with you,” Dome pointed out.

It should be clarified that the publication of the photos of the engagement was made simultaneously on her account and on his account, this Saturday, November 13, and since then the couple has been receiving messages of friendship from the show and other areas who congratulate you on this great news.

The Actor Taylor Lautner, born in Michigan, United States, blunted from 2008 for her starring role of Jacob Black or Wolf in the film saga Twilight with Bella Swan (played by Kristen Stewart) and Edward Cullen (Robert Pattinson), tapes Inspired by Stephanie Meyer’s books. Over the years, he took advantage of the popularity that this project gave him to film some tapes such as Valentine’s Day and Abduction, but he did not do well with the critics, nor at the box office, so he had not been seen more than in the 2018 series Cuckoo .

The grounding release date has finally been announced