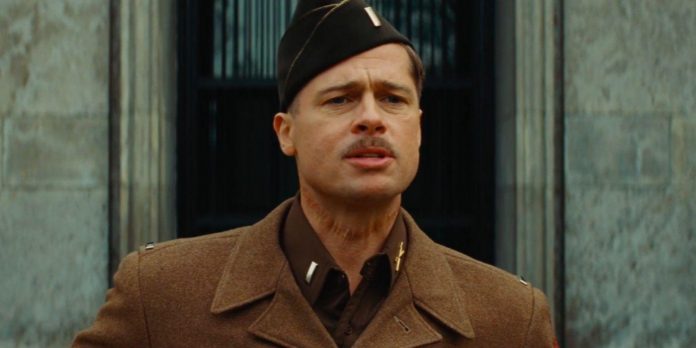 Quentin Tarantino recalls Brad Pitt’s performance in Inglourious Basterds and offers his take on what makes Pitt such a special movie star. Released in 2009, Tarantino’s sixth feature film as a screenwriter and director tells about Pitt in the role of Lieutenant Aldo Rein, the leader of a group of Jewish-American soldiers in France, who face one single task — to kill Nazis. In addition to the “Bastards” of Aldo Rein, an alternative historical film about the Second World War also tells about the young owner of a French cinema, Chosanne Dreyfus (Melanie Laurent) and her plot to assassinate the leadership of Nazi Germany.

After their first collaboration on Inglourious Bastards, the actor and director reunited in Tarantino’s ninth and most recent film, Once Upon a Time in Hollywood. In contrast to Rick Dalton, played by Leonardo DiCaprio, Pitt played the best friend and understudy of a fictional Hollywood actor – cool, calm and collected Cliff Booth. For this role, Pitt finally received his first Academy Award for Best Supporting Actor after previous nominations for “Twelve Monkeys”, “The Mysterious Story of Benjamin Button” and “Money Ball”.

Tarantino spoke to GQ about Brad Pitt’s recent profile and shared his opinion on what makes him such a special movie star. The director said that the actor’s ability to change shape today is a forgotten art among movie stars. Tarantino also compared Pitt’s stardom with Paul Newman, Robert Redford and Steve McQueen and admired his presence on the screen, recalling a special moment from the filming of “Inglourious Bastards”. Read what Tarantino said about Pitt below:

He suggests an older generation movie star. He’s really good-looking. He is also very masculine and fashionable; he understands the joke… But what only the directors who work with Brad and the actors who play with him really know, what he is so incredibly talented at, is his ability to really understand the scene. He may not be able to articulate it, but he has an instinctive understanding of it. He is one of the last remaining movie stars on the big screen. It’s just a different breed of people. And to be honest, I don’t think you can describe exactly what it is, because it looks like a description of the starlight. I noticed this when we were filming Inglourious Bastards. When Brad was in the frame, it didn’t feel like I was looking through the camera’s viewfinder. I felt like I was watching a movie. His mere presence in the four walls of the frame created such an impression.

Based on Tarantino’s enthusiastic praise, it becomes obvious that even one of the most legendary directors Hollywood has ever seen can still be amazed by Brad Pitt’s talent and charm. With two collaborations under their belt, the question naturally arises whether they will join forces for the third. Unfortunately, time seems to be running out. In the same profile, Pitt suggested that he might retire soon. His Bullet Train summer tent is out in theaters this August, and he’ll follow that up with Damien Chazelle’s Babylon this Christmas, but beyond that, Pitt’s retirement may be close.

Tarantino has long said that he wants to end his directorial career after 10 films that he can be proud of. The “Inglourious Bastards” director has teased everything from “Kill Bill 3,” a spaghetti western and even a horror movie for his movie with a microphone, so it’s unclear if even he knows what his last movie will be at the moment. As Pitt is considering retirement in the near future, and Tarantino’s tenth and final film is just around the corner, we hope that the two of them are destined to reunite to make one last U-turn for the ages.

Nintendo Switch Games On Sale At Nuuvem with Up To 30%...